Just received a personal email* from Michele Bachmann expressing disappointment and consternation regarding the pathetic budget deal agreed to by the doddering GOP old guard.

Early this morning, I joined with 27 other Republicans in opposition to the continuing resolution brokered by President Obama and Congressional leaders. While millions of Americans expect Congress to make significant efforts to address our nation's fiscal problems, the deal that was made leaves us with a paltry $36 billion in cuts and fails to defund Obamacare and Planned Parenthood... 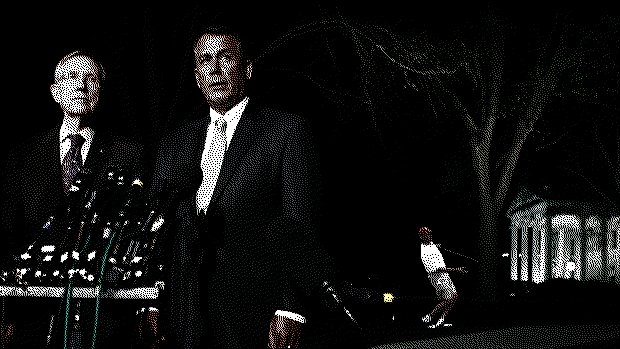 ...This continuing resolution is a disappointment and ignores the mandate given to us by voters in November. Keeping in line with my promises, I will continue to oppose any continuing resolution or budget plan that does not defund Obamacare or make significant cuts in government spending, and I will not yield in this effort.

Good for you, Michele. We have your back.

Mark Levin asked the question last night (MP3): how in the hell are the Republicans going to stand up to the lunatic left on the issue of raising the debt ceiling -- or the 2012 Ryan budget -- if they can't even follow through on their promises to cut $100 billion from the current budget by shutting down part of the enormous federal government for a few days?

I have an adjective to describe these pathetic old bulls in the Republican Party: sackless.

And I have a message for them: we are going to overwhelm the legacy Republican Party with Constitutional conservatives (note: not "Tea Party extremists" like the Democrat caucus has instructed you to say) in 2012 and kick your asses out of the House leadership positions.

And another thing: Michele Bachmann** has more guts in her left pinky than all of you have combined.


Update: Allen West for Speaker of the House, Michele Bachmann for President.


* As did a few hundred thousand other folks.
**: You can support MichelePAC here.

HEH, this is the same Mrs. Bachmann, whom I used to love, who revealed she had no clue as to the real location of a very special place made famous during the Revolutionary War.

She is a fine American, who has let a little too much ego get the best of her. WE have seen this quite often.

This is the same Bachmann whose growing hubris makes her suddenly think she is going to win a Presidential Nomination?

Please, she should consider running for a CEO position, such as Governor and gaining a little more experience.

Bachmann just jumped again foolishly on this issue. It is regretful.

"old guard" is another tired term for "establishment" - a big vapid sign about someone who is playing populism to appease a fashionable offering.

Also, this is the same LEVIN, who foolishly slandered the offering of Powerline for the disastrous enabling of the Democratic Party in Delaware.

Levin has lost his credibility over that disastrous Primary fiasco.

This is more reactionary emotive garbage, and is a big loser. The likes of Bachmann and Levin in this case, are showing the same insanity which pushed a disaster like O'Donnell.

They remind one of the little delusional offering of Pat Buchannan, when he thought he would diss the GIPPER, and later thought he could become President.

One can only hope the mighty Ross will come back to reality again.

I had a one-to-one lunch with Col. West last summer at First Watch restaurant and he is a man of honor and integrity who believes firmly that the USA is living on borrowed money and [eventually] borrowed time if the economy is burdened with intrusive obnoxious monstrosities like ObamaCare and social-engineering boondoggles that have never worked since their inception [too many to mention].

I just hope that the current stand-off can be mutated into something resembling Cong. Paul Ryan's gutsy and brainy $6.2 trillion pare-back of spending over the next decade. I know Col. West will be leading the fight to get Ryan's imaginative and brilliant ideas legislated into reality. It's a matter of continued life as a world leader for the USA.

Once the dollar is taken down from its pedestal as the world's reserve currency, Soros will have won, as I'm sure he's shorting the dollar just as he shorted the pound in 1990---hoping to gain a windfall of billions of Euros or pounds or whatever currency he's converting the dollars into.

The money Soros is sluicing into Media Mutters, Think Process and other left-wing hate-America blogs is seed money for the eventual downfall of the dollar.

Yeah, and in the hours leading up to the shut down, she is on record as saying the Republicans need to cut a deal here and avert a shutdown. That the bigger fight is the deficit and debt limit. Go over to HotAir where there is a post alleging her and Huckabee were on board with cutting a deal, hence giving Boehner cover with Social cons and the TeaParty. I got that email from Bachmann as well and was floored.