When the "Breitbart lynch mob" came for @brooks_rosa, the Leftist Hypocrisy-Meter exploded into a million shards

Writing at the far left Foreign Policy online magazine, columnist Rosa Brooks complains that her hints of a military coup that would topple Dictator Trump eventually led to a torrent of criticism, some of it profane. She terms such trolling and criticism a "lynch mob", albeit a very virtualized version of one.

She'd have a tad more credibility if she didn't repeatedly beclown herself with examples of Trump's "extremism". Insert helpful infographic here (click to enbiggen): 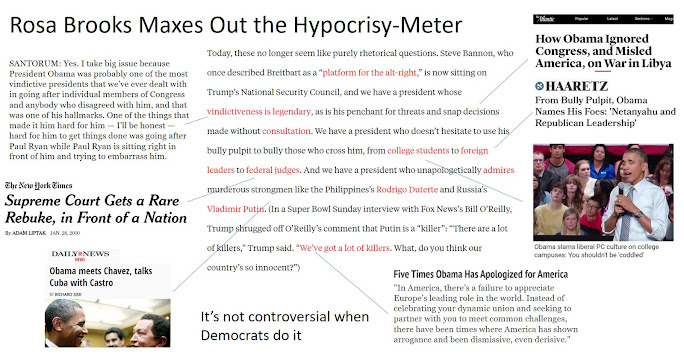 See, Rosa, it's only controversial when Republicans do it, right?

Leftists are self unaware hypocrites.