HEY, N00BS: Laws are for the little people, not the Clintons!

Transparency: Hillary Clinton insists she did everything by the book, that she broke no laws and heeded all regulations. That book is obviously not the State Department records management handbook.

The government's book says that you don't get to keep materials, classified or unclassified, in your personal possession and then get to sift through them at your leisure to decide which ones the government that paid you gets to see. 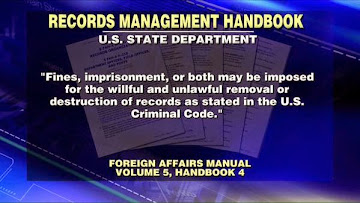 All documents are the property of the government. The State Department determines which ones are returned to you.

As Shannen W. Coffin, a contributing editor at National Review and senior lawyer at both the White House and Justice Department under President George W. Bush, points out, a provision titled "Removal Procedures" requires departing federal employees to relinquish any classified materials at the time of departure and to clear the removal through records-management officials.

State Department employees, from the secretary on down, have to abide by this process.According to Coffin, the records management handbook says, "(The) departing official or a staff member must prepare an inventory of personal papers and non-record materials proposed for removal."

Then the departing official must "request a review of the materials proposed for removal."

On leaving, the official must sign Form OF-109, a formal separation statement, certifying under penalty of law the departing official has "surrendered to responsible officials all unclassified documents and papers relating to the official business of the government acquired by me while in the employ of the (State) Department."

The employee does not get to determine what is classified or not, personal or not, and Clinton's assertion that she never emailed classified material is, as they say in court, irrelevant and immaterial.

She doesn't get to return 55,000 pages of documents nearly impossible to search years later. That she returned these materials in paper form, not an electronically searchable form, is a deliberate attempt to slow down and obstruct any investigation.

If an employee violates the terms of the Form OF-109 she or he has signed, that act is punishable by Section 18 U.S.C. § 1001 of the criminal code, which makes it a crime to knowingly and willfully falsify or conceal facts made in statements to federal agencies concerning matters under their jurisdiction.

There's a warning in the official records management handbook that states: "Fines, imprisonment or both may be imposed for the willful and unlawful removal or destruction of records as stated in the U.S. Criminal Code." That is the law, and Clinton was sworn to uphold the law.

Remember, she decided on the day she was confirmed as secretary of state to conduct all her official government business using a personal email account on a private server. This was not a matter of "convenience" but of political expedience by someone who knew she was running for president from day one and sought to hide from public view any unflattering or politically damaging information.

If Clinton signed Form OF-109, she should be prosecuted. If she didn't, we need to know why not and who granted her that waiver. We don't need a felon running for president.