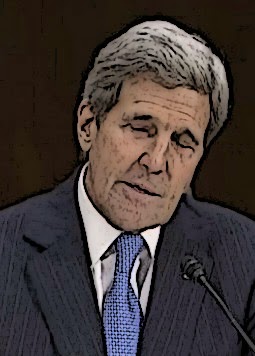 The Wall Street Journal reported yesterday (Google link) that Secretary of State John Kerry is still upset about the open letter Sen. Tom Cotton (R – Ark.) wrote last week that was signed by 46 other Republican senators arguing that it was Congress’ role to review treaties.

Mr. Kerry said on Saturday in Egypt that these American lawmakers were “wrong.”

“It is almost inevitable it will raise questions in the minds of the folks with whom we’re negotiating as to whether or not they are negotiating with the executive department and the president, which is what the constitution says, or whether there are 535 members of Congress,” Mr. Kerry told reporters in the Red Sea resort of Sharm el-Sheikh.

“Let me make clear to Iran…that from our point of view, this letter is incorrect in its statements,” he added. “As far as we are concerned, the Congress has no ability to change an executive agreement.”

It strikes me as odd that Kerry is doubling down on his non-binding argument. An executive agreement is not binding, unlike a treaty, and therefore not subject to Congressional review. It’s also odd that he claims, “as far as we are concerned.”

Shouldn’t the Constitution be the standard by which the Republican claims are judged? Finally, there’s Kerry’s famous declaration at the time the Joint Plan of Action was signed in November 2013 that the agreement was not based on trust. So if the agreement is not based on trust and it’s non-binding what “mechanism” will there to be verify that Iran isn’t overtly or covertly pursuing an illicit nuclear program?

More and more I’m convinced that Cotton’s reason for writing the letter was to smoke out the administration on this point.

It wasn’t unknown that the administration was portraying the emerging agreement with Iran as “non-binding.” Armin Rosen of Business Insider, for example, suggested this a week before Kerry and other administration officials admitted it. The problem of course with the administration’s position is, as Rosen wrote last week:

The US wouldn’t have a firm legal obligation to uphold the agreement, so Iran would have a built-in reason to assume American bad faith and push the limits of a future deal. In other words, without a legal guarantee on the US side, compliance with an agreement is potentially diluted Tehran’s side as well — and remember, this is a regime that hid the existence of two secret nuclear facilities and operated 20,000 uranium enrichment centrifuges in defiance of repeated UN Security Council resolutions.

He [Zarif] emphasized that if the current negotiation with P5+1 result in a Joint Comprehensive Plan of Action, it will not be a bilateral agreement between Iran and the US, but rather one that will be concluded with the participation of five other countries, including all permanent members of the Security Council, and will also be endorsed by a Security Council resolution.

The Security Council gambit leaked by Zarif and apparently other sources prompted Sen. Bob Corker’s letter released Thursday, which called out the administration for bypassing Congress.

There are now reports that your administration is contemplating taking an agreement, or aspects of it, to the United Nations Security Council for a vote. Enabling the United Nations to consider an agreement or portions of it, while simultaneously threatening to veto legislation that would enable Congress to do the same, is a direct affront to the American people and seeks to undermine Congress’s appropriate role.

Corker pointed out that various senior administration officials had promised to take any deal to Congress, so in addition to the “affront to the American people,” the administration is going back on its word.

(About the same time Corker released his letter, Reuters reported that the P5+1 powers were negotiating with Iran to lift the U.N. Security Council sanctions imposed on Iran for breaching its Nuclear Nonproliferation Treaty obligations and failing to come clean about its past nuclear research to the International Atomic Energy Agency.)

Corker wasn’t the only Republican to object to administration’s plan of bringing the agreement to the U.N. Security Council, and, at first the National Security Council (NSC) pushed back against these reports, as Jennifer Rubin observed. Rubin cited BuzzFeed, which carried the NSC denial.

The U.S. has “no intention” of using the United Nations to lock into place any potential deal with Iran over its nuclear program, a senior U.S. official said on Thursday.

The United States will not be “converting U.S. political commitments under a deal with Iran into legally binding obligations through a UN Security Council resolution,” Bernadette Meehan, spokesperson for the U.S. National Security Council, said in a statement emailed to BuzzFeed News.

But then over the weekend Chief of Staff Denis McDonough, in a letter to Corker, no longer pretended that Security Council would not be involved.

(I am no lawyer, but I think that Jack Goldsmith gives McDonough and the administration way too much credit here. The implication of the letter is that you dance to our tune or risk undermining the careful diplomacy we’ve carried out. I find the David Rivkin-Lee Casey analysis here, even without reference to the McDonough letter, a lot more convincing.)

The administration’s incoherent response to the Cotton letter suggests that it wasn’t ready for the Security Council gambit to be revealed. It looks like Kerry and other administration sources, hoping to evade the issue, used the “non-binding” defense to say that the administration is not negotiating a treaty.

Then apparently the NSC tried to say that the Security Council would not play a role but no one believed the argument, so McDonough played it straight. Why Kerry is still fixated on the Cotton letter, I have no idea. My best guess is that he’s hoping to distract people from thinking too much about the implication of McDonough’s admission.

The game Iran is playing is that it wants the P5+1 nations (the P5 nations being the five permanent members of the Security Council) to revoke all six Security Council resolutions finding Iran in breach of its NPT obligations and imposing sanctions in response to its bad behavior. With this “get of jail free” card, Iran will turn to the United States and demand that Congress lift the sanctions it passed. I have little doubt that whatever lip service McDonough now pays to “Congress making its own determinations” about a deal will be gone if and when the Security Council lifts the sanctions. If Congress remains unconvinced of Iran’s reformed behavior, the administration will tell Congress that “if congressional action is perceived as preventing us from reaching a deal, it will create divisions within the international community,” just as it is doing now.

Intentionally or not I think that McDonough gave away the game when he wrote, “We agree that Congress will have a role to play – and will have to take a vote – as part of any comprehensive deal. As we have repeatedly said, even if a deal is reached, only Congress can terminate the existing Iran statutory sanctions.”