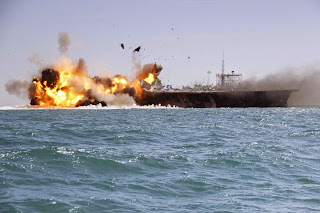 Threatened: A translated military handbook showing Tehran's support for a nuclear electromagnetic pulse attack on the U.S., and the presence of Iranian warships off our coast, show that Israel isn't the mullahs' sole target.

Last month in a speech to his air force commanders, Iran's supreme leader, Ayatollah Khamenei, boasted of Tehran's achievement in enriching uranium to the 20% level.

A BBC transcript of his speech showed that twice the assembled air force commanders chanted, "Death to America." Is there something about this that President Obama does not understand?

This is the same ayatollah, Obama assured us in his speech to the Iranian people five years after he ignored and failed to hear cries during the 2009 Green Revolution, who had issued a fatwa against the development of nuclear weapons.

Fatwa? Fat chance. Sadly, we have reached the point where a U.S. president trusts American security not even to a piece of parchment but to an Iranian mullah's fatwa.

Iran's true intentions were documented by a column by Peter Vincent Pry, executive director of the Task Force on National and Homeland Security, a congressional advisory board.

Written for Israeli news outlet Arutz Sheva just prior to Israel's recent elections, Pry's column revealed the threat found in a translation of an Iranian military handbook of an Iranian electromagnetic pulse (EMP) attack on the U.S.

The Associated Press recently reported that under the best-case scenario, a nuclear deal with Iran would leave as many as 6,000 centrifuges whirring away toward the goal of building an Iranian atomic weapon. This is in a country awash in fossil fuel that doesn't need nuclear energy but does desire a nuclear bomb to wipe Israel off the face of the Earth.

Iran, as Pry notes, also wants to wipe America off the face of the Earth, or at least remove it from the 21st century.

"One nuclear warhead detonated at high altitude over the United States would black out the national electric grid and other life-sustaining critical infrastructures for months or years by means of an electromagnetic pulse," Pry wrote.

"A nationwide blackout lasting one year, according to the Congressional EMP commission, could cause chaos and starvation that leaves 90% of Americans dead."

Such an attack could occur in a variety of ways. Iran has orbited four satellites, some weighing over a ton, demonstrating that it can send a nuclear warhead to or over any target on Earth. Or it could come from a missile launched by a ship off our Atlantic coast.

As Pry points out, such an event would not require an Iranian nuclear test beforehand. Our World War II Manhattan Project developed two nuclear bombs, each of a different design. One design was used without testing — Hiroshima was the test. The Iranian test could be Washington.

Those who scoffed at Tehran's announcement that its warships would be deployed in the Atlantic ignore that an Iranian ship off our coast would be the perfect vehicle for delivering an EMP attack. A freighter would more likely be used than a warship and could be scuttled after the launch, giving the attacker a degree of anonymity.

Iran has demonstrated that it can launch missiles off freighters, and recently purchased Russia's Club-K missile system. The Club-K is a complete missile launch system disguised as a common shipping container. Armed with an Iranian nuclear bomb, it would be the perfect instrument for an EMP attack.

Meanwhile, we get used to Iranian ships being there.

Israeli Prime Minister Benjamin Netanyahu rightly warned in his March 3 address to Congress that Iran nuclear weapons would pose an existential threat to the U.S. as well as Israel. And an Iranian fatwa will protect neither of us.

There is no evidence of an Iranian fatwa forbidding the construction of a nuclear device.

Iran has every incentive to attack before Obama leaves office. Democrat or Republican, the next President would retaliate, this president will not.

Anonymous said...
This comment has been removed by a blog administrator.
3:11 PM

‘Nuclear 9/11’ victims remembered in solemn ceremony.
Dateline: Sep 11, 2017 Richmond VA
The remembrance service for the untold victims of the first ‘terrorist’ nuclear attack on US soil took place today. The temporary memorial set up just south of Richmond VA was the site for the solemn ceremony due to high radiation levels at the actual location of the attack.

It was one year ago today that an alleged Iranian ‘suicide ship’ detonated it’s deadly cargo in the harbor of Hampton roads. The incident killed upwards of 1 Million people in an instant, while an estimated 350 thousand also died in the weeks that followed due to radiation and injuries sustained in the event.

While the ceremony was small due to the ongoing war, it still gave the survivors closure in the ordeal. Radiation levels in and around the 300 Square mile Hampton roads attack site and exclusion zone have stymied efforts to fully investigate the incident and provide a full accounting of the dead and injured.

Barack Obama’s attempt to surrender to the Iranians after the attack sparked a virulent reaction of a near unanimous impeachment vote and removal from office that stunned even the most cynical of political observers. The subsequent investigation into his administration revealed many criminal acts and illegal activities. Many suggested that 75 years to Life was far too lenient a sentence for the former chief executive.

Barack Obama, better known as Prisoner #1138 was secretly transferred to an unknown location to serve out the rest of his sentence due to threats to his safety even within solitary confinement at Beaumont Federal Penitentiary.

What do you think the US has in store for other nations? HMMMM?? This nation is an empire. BOMBING the eff out of the rest of the world is RIDICULOUS, MURDEROUS, AND STUPID, but it sure makes a lot of money for those that you worship. STOP BEING WARMONGERS. Stop making up crap about our current president because you rely on the warmonger lies for your 'news'.

Deeply flawed reasoning and weak and manipulated facts. Iran isn't the main risk. First, if Iran attacked the US in what would be tantamount to full scale strategic war aimed at our civilian population, we'd retaliate and Iran would be incinerated. Second, we have known about the threat of EMP attacks for decades. Nothing has been done. I know it tickles the fantasies of less than educated factions of the right to blame Obama personally; but that kind of weak minded intellectual self abuse gets us nowhere. The United States can pursue a three part strategy to guard against the threat if an EMP attack....and it's important we do so. Putting aside the threat of an attack, we know for a fact the same catastrophe will eventually be caused by a solar flare. It happened in the 1850s and fried telegraph stations (the on,y electrical infrastructure if the time). Look up "the Carrington Event." It will happen again. Part one of our defense is military. We need a forward based (ship based) missile defense system. That's being built and deployed. But it's the only part of the problem that is being worked on and it's not sufficient to protect the USA. The second part of protecting our country is hardening and rebuilding key elements of the grid so that power could be quickly restored. This part of the plan has wide support among anyone who understands the risk if the problem. Many luberal and conservative politicians have both been ringing the bell on this issue for a while. Newt Gingrich is a leading advocate as is Californias liberal Governor Jerry Brown. There has been a law introduced in Congress called the SHIELD Act. Unfortunately, the Do Nothing Congress will NOT pass this bill out of committee. It requires the energy industry to spend money so the special interests refuse to let it pass. The SHIELD Act should treat this as a national defense issue and have some money put behind it. Until Speaker Ryan makes this an issue the SHIELD Act and potentially more effective laws will stay stuck in Congress. The third part of defense would be a more substantial project to build a grid that is both shielded and far more efficient. President Obama did promote this since 2009 but Congress has never funded it. So, this us a real and serious problem that, like cyber security is one of the most real threats we face. But our government isn't responding. When smart people on both sides are trying to break the corporate owned Congress to do something about this risk and nothing is happening you have to be a pretty sad individual to ignore the reality as if this us going to get any better under a GOP president when a GOP congress won't pass legislation and neither GHWBush or his son lifted a finger to fix it. The issue is over riding the influence of corporations over policy.