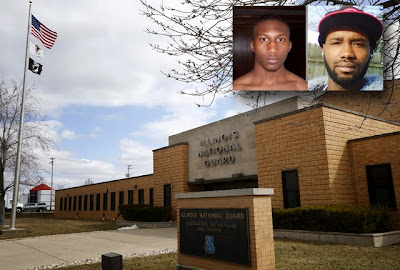 President Obama's "JV" terrorist team has metastasized to the point where its franchisees have spread across continents and oceans, with the FBI investigating ISIS-related activities and plots in all 50 states, including a very dangerous one in the commander in chief's home state of Illinois.

One of those FBI investigations involved the arrest Wednesday of Hasan Edmonds — a supply specialist with the Illinois National Guard, who had trained at the Joliet Armory since 2011 — at Chicago's Midway International Airport as he prepared to board a plane to Detroit and then to Cairo via Amsterdam, with the goal of joining the Islamic State.

Two hours later, authorities picked up his cousin, Jonas Edmonds, who had planned to wear Hasan's uniform and attack the facility in the same manner that Maj. Nidal Hasan did at Fort Hood, Texas.

The cousins had scouted out the armory on Tuesday, with Hasan Edmonds picking up a copy of the facility training schedule. The plan was for Jonas Edmonds to carry out the assault using AK-47s and grenades.

As they cased the National Guard facility on Tuesday, according to a report in the Chicago Tribune, the cousins from Aurora, Ill., discussed where soldiers would be stationed inside, which rooms and areas to avoid, and the firepower required to carry out the assault. The plot was uncovered when an FBI source made connections with Hasan Edmonds on Facebook, inquiring about his plans to travel overseas to join the Islamic State.

We are mindful of the fact that not all IS recruits and sympathizers are so careless in revealing their intentions. It may be a cliche, but we have to be right all the time while terrorists only have to be right once.

If successful, the planned assault on the Joliet Armory might have mirrored the terrorist attack by Nidal Hasan, whose Nov. 5, 2009, rampage at the Army base near Killeen, Texas, killed 13, including a pregnant soldier, and wounded 32, as he shouted "Allahu Akhbar!"

The Obama administration would dismiss the attack as "workplace violence," just as they dismissed the Islamic State as a "JV" terrorist team.

Last August, we editorialized on the implications of an anonymous tweet with a photo showing the front of the Old Republic building on Chicago's Michigan Avenue. As a shopping mecca dubbed the Magnificent Mile, Michigan Avenue is another symbol of what, from a radical Islamist perspective, is wrong with Western culture and civilization.

It adds the hashtag #AmessagefromISIStoUS.

As the arrest of the cousins from Aurora, Ill., shows, they are also wearing our National Guard uniforms.

We are reminded of the case of Abdirahmaan Muhumed. Before he went to Syria to fight and die for the Islamic State, he worked at Delta Global Services, a wholly owned subsidiary of Delta Air Lines, at the airport in Minneapolis. His job was to clean aircraft, and he had a security clearance that gave him unfettered access to the tarmac and passenger jets.

The Islamic State is indeed already walking our streets. "We have active investigations of people in various stages of radicalizing in all 50 states," FBI Director James Comey told the National Association of Attorneys General recently.

Unfortunately, unless the Islamic State starts showing up on our golf courses, President Obama may not seriously recognize or admit that Islamic terrorism has already reached our shores and is an increasingly dangerous threat.