For some reason, Ted Cruz decided to appear on MSNBC's The Morning Shmoe (Mark Levin's name for the lowest-rated news program on the lowest-rated network), where the combined IQ of the hosts -- the science is settled -- is roughly the square root of that of a goldfish.

MIKA BRZEZINSKI: Well, okay, do you know exactly what the deal is to call it a bad deal? Do you have all the information? I don't think you do. 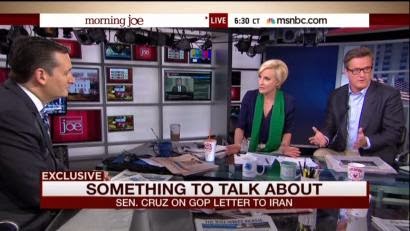 TED CRUZ: We don't. We have some that the administration has leaked. And oddly enough the administration leaks more details about the deal to the media than they actually inform Congress. But I can point out the idea you're suggesting, if I'm understanding you'll right, that Congress shouldn't be interfering in what the president is doing, from the beginning of our country, Congress has done so.

Let’s go even further back. Woodrow Wilson, at the end of World War I, negotiated the Treaty of Versailles ending World War I. Went back to Congress, the Senate rejected it. Now on your view, I guess, you know, the New York Daily News would run a story on the front page putting the pictures of all the senators and calling them traitors.

Look, that's how our system works. And I think the constitution is a wonderful thing. We don't have a supreme leader like Iran does. We have checks and balances. And if you want to make law in this country, you need both the president and Congress. This is a unilateral president and that's an enormous problem.

BRZEZINSKI: I never said that.

BRZEZINSKI: But this is all deflecting. The history lesson and this is deflecting from whether or not the intention of the letter is what's happening and I'm concerned you're saying you liking the effect it’s having.

SCARBOROUGH: I’m sorry. Let me finish what I was going to say. 1984, it wasn't just the Boland Act, it was 1984 Democratic lawmakers wrote a letter to Ortega apologizing for Ronald Reagan’s anticommunist views. So this is not unprecedented. You can be offended, but please, let's call it what it is and that is unfortunately a long part of our history.

You can watch the relevant dialogue at NewsBusters.

Oh, and Mika, even the far left Democrat apologist Alan Dershowitz agrees. Writing at Gatestone, he says that the "President is not Commander in Chief of Foreign Policy."