A computer in charge of your vehicle: what could possibly go wrong? 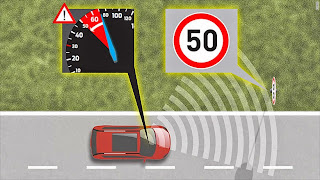 Ford says it has the answer for speed demons who can't keep their gas pedals off the metal: A car that reads speed limit signs and automatically slows down.

Ford says that the newest edition of its S-Max car has "a new technology that scans traffic signs and adjusts the throttle to help drivers stay within legal speed limits and avoid fines."

...The technology seems to be a step in the direction of the driverless car, also known as an autonomous car. While these cars have yet to hit the market, Audi unveiled one last year that reached 140 miles per hour with no driver at the wheel.

Google and Nokia have also been experimenting with driverless cars. Google's electric-powered LUTZ Pathfinder started rolling through London last month at a not-so-brisk 12 miles per hour, and the company plans to expand tests later this week.

All the way back in 2012, I wrote that Americans should be very leery of self-driving cars. My rationale was simple and completely relevant today.

• How long until government mandates the use of self-driving cars, under the aegis of safety, fuel efficiency, traffic control or heaven knows what?

It never scales back. It never "right-sizes". It never strips away laws or sheds outdated regulations.

Write it down. Put it in the time capsule.

Self-driving cars ride on the road to tyranny.

So how long until kids start holding up '20MPH' signs in the back of the minivan and watch the autodrive cars slam on their brakes in interstate traffic?

So, if I have to briefly exceed the speed limit in order to pass a car doing less than the speed limit, this Ford will leave me hanging out in the oncoming lane until I'm a bug on a bumper?

Waiting for the first lawsuit from a fatality because someone couldn't speed up to avoid a collision.

You'll have to remortgage your house in order to fix or replace those computer modules.

Resistance is futile. You will be assimilated. Comply. It sounds like we've been taken over by the Borg.

After reading this I'm automatically reminded of the juvenile prank that is sometimes seen on speed limit signs where the kids take some paint and change a "30" to an "80" - Who then is responsible for the accidents and deaths resulting this sign "scanning" - "speed demon"?