Larwyn's Linx: Ted Cruz's Dazzling Speech Scared the Hell Out of the Left 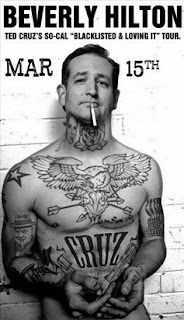 Liberal Prof Dershowitz: Cruz was “Off the Charts Brilliant”: Keith Koffler
The Texas Reagan Announces for President: Jeffrey Lord
The DNC needs a history lesson if this is how they’re going to attack candidate Ted Cruz: Twitchy

Help our Bad Ass Wounded Warriors!: Hannity
Bracken Sends: WRSA
What Really Happens When You Go to the Hospital: Dr. Michael Weisberg, Author of "The Hospitalist"

QOTD: "From the dawn of this country, at every stage America has enjoyed God’s providential blessing. Over and over again, when we face impossible odds, the American people rose to the challenge. You know, compared to that, repealing Obamacare and abolishing the IRS ain’t all that tough.

The power of the American people when we rise up and stand for liberty knows no bounds.

If you’re ready to join a grassroots army across this nation, coming together and standing for liberty, I’m going to ask you to break a rule here today and to take out your cell phones, and to text the word constitution to the number 33733. You can also text imagine. We’re versatile.

Once again, text constitution to 33733. God’s blessing has been on America from the very beginning of this nation, and I believe God isn’t done with America yet." --Sen. Ted Cruz

Anonymous said...
This comment has been removed by a blog administrator.
11:34 AM

Ted Cruz is my candidate. I live on a fixed income and live from month to month - BUT - I will donate to Cruz as much as I can and go without just to help him. Conservatives have got to stick together and support Cruz. I am leery of Walker for some reason. I get the feeling he is a RINO plant somehow. But, Cruz is the real deal. He is just what America needs to get back on track.

QueMan said...
This comment has been removed by a blog administrator.
10:43 AM

Anonymous said...
This comment has been removed by a blog administrator.
3:20 PM