How Obama has destroyed America’s free enterprise system, in 2 charts 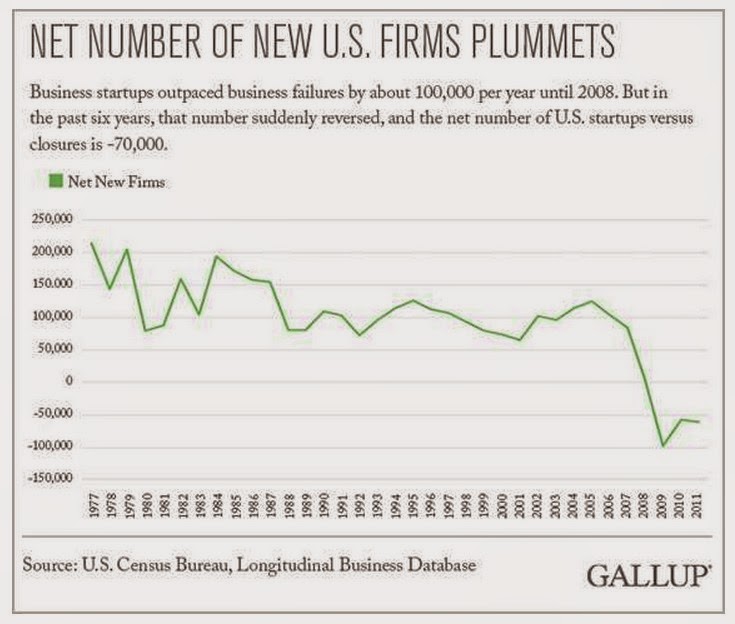 The decline in business startups may not be news to my readers, but these charts and stats from Gallup (h/t to John Dearie) are still startling to me:

— The U.S. now ranks not first, not second, not third, but 12th among developed nations in terms of business startup activity. Countries such as Hungary, Denmark, Finland, New Zealand, Sweden, Israel and Italy all have higher startup rates than America does.

— American business deaths now outnumber business births. The U.S. Census Bureau reports that the total number of new business startups and business closures per year — the birth and death rates of American companies — have crossed for the first time since the measurement began. I am referring to employer businesses, those with one or more employees, the real engines of economic growth. Four hundred thousand new businesses are being born annually nationwide, while 470,000 per year are dying.

— Until 2008, startups outpaced business failures by about 100,000 per year. But in the past six years, that number suddenly turned upside down. There has been an underground earthquake.

— Business startups outpaced business failures by about 100,000 per year until 2008. But in the past six years, that number suddenly reversed, and the net number of U.S. startups versus closures is minus 70,000. 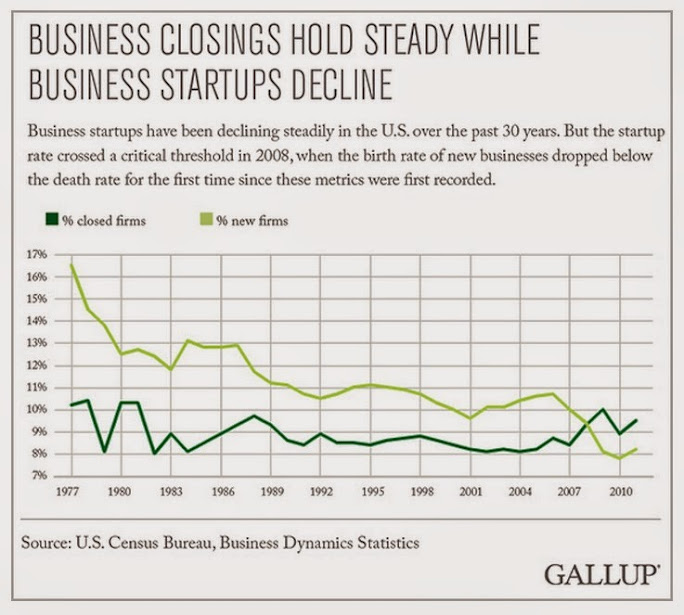 The analysis from Gallup CEO Jim Clifton goes on to argue that governments around the world have placed to much emphasis on innovation and too little on entrepreneurship: “Our leadership keeps thinking that the answer to economic growth and ultimately job creation is more innovation, and we continue to invest billions in it. But an innovation is worthless until an entrepreneur creates a business model for it and turns that innovative idea in something customers will buy.”

I don’t think that’s quite right, or at least it’s kind of fuzzy. I think Clifton confuses basic scientific research and invention with economic innovation that generates consumer-relevant value. It is often the entrepreneur that turns the former into the latter. We need more of both. We need more ideas and more startups to run with them, especially startups that can become big, profitable employers. More exploration and exploitation. And when it comes to that, the U.S. is still a leader. No large economy generates more high-impact entrepreneurs that America’s. (There is also an important difference between entrepreneurship and self employment.) But we could do better. And if we want to have a dynamic economy that generates sustainable growth and good jobs, we must. Here is some good stuff on entrepreneurship from an interview with Erik Brynjolfsson and Andrew McAfee, authors of The Second Machine Age:

Erik Brynjolfsson: It’s not that we think everyone’s going to become an entrepreneur, or even a personal trainer. It’s that entrepreneurs are the ones that invent and discover the new industries. Ninety percent of Americans used to work on farms, remember, back in 1800, and it was 42 percent in 1900, but Henry Ford, Steve Jobs, Bill Gates, and lots of other people, helped invent whole new industries that we couldn’t have conceived of at that time. We’re hopeful that there will be a next generation of entrepreneurs that will help invent the new industries. …

By your own chart, the destruction happened in 2008, stabilized in 2009, and has turned slightly positive. You seem to forget who was driving the bus over the cliff in 2008. (PS: Notice how the great Conservative prescriptions for austerity and 'immediate budget balancing' have created an economic revival in Europe? Yeah, me neither.)

So, Anonymoous, which would you consider worse: The potential for an economic revival by proper fiscal prudence, or the *demonstrated* economic ruin by decades of bugetary mis-management by government politicians who can't see beyond the next election?

Just a reminder, Didn't the Demoncraps recapture the Senate in 2006? :-)

Oh, yes, and lest we forget. It was Carter and Clinton who set the stage for the collapse, and Democrats who stonewalled reform to prevent it.
http://spectator.org/articles/42211/true-origins-financial-crisis