In an interview featured in Playboy Magazine (I only read it for the compelling stories), Dick Cheney unleashes a fusillade of nuclear truth-bombs on Barack Obama, who is -- without question -- the worst president in American history. Some highlights: 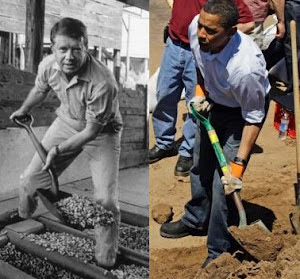 ON SQUANDERING A VICTORY IN IRAQ

...Where do you start? I think with respect to the situation in Iraq, his precipitous withdrawal and refusal to leave any stay-behind forces, to negotiate a Status of Forces Agreement with the Iraqis, was a huge mistake; we are paying a price for it now. He’s having to go back in now, and the guy who campaigned on the basis of bring the boys home and get out of Iraq is now redeploying forces to Iraq...

ON DEGRADING THE MILITARY CAPABILITY OF THE UNITED STATES

...I don’t think he ever bought into the notion that we’re at war, in terms of a war on terrorism; I think he always wanted to treat it as a law-enforcement problem. I think he’s done enormous damage to the military. I think what’s happened to the military in terms of morale, in terms of financing, budget and so forth is just devastating. The way Obama is functioning now, he’s crippling the capacity of future presidents to deal with future crises. It takes a long time to build up that military force. And I am absolutely convinced there will be a future president—two or three times down the road, perhaps—who will be faced with a major crisis and will not have the military capability he needs to deal with it. We are limiting the options of future presidents because of what is happening to the defense budget today...

ON THE DESPONDENCY OF OUR ALLIES

...I came to town in 1968, and I have never seen people I have known in some cases for a quarter of a century—foreign leaders, especially in the Middle East—who are so terribly frustrated, angry, frightened. “Whatever happened to the United States?” There’s a conviction they can’t count on us, that our word doesn’t mean anything...

ON OBAMA'S "RED LINE" IN SYRIA

That’s a classic example, where Obama got everybody ready to do something about Syria and then at the last minute pulled the plug. I had a prominent Mideast leader talk to me when I was there last spring. First time I’d ever heard him say this; he’s always been very self-confident and very much in command. He said, “You assume there is no political price to be paid for those of us over here who support the United States—wrong assumption. It is sometimes a real question of leadership these days whether or not it’s smart, politically, for us, with our people, to be friendly to the United States.” General Abdel Fattah el-Sisi, the new president of Egypt, has been to Moscow; he hasn’t been to the United States. It’s not because he loves Russians; it’s because the political price he would have to pay domestically, inside Egypt, to come to the United States and be seen with Barack Obama would be very damaging for him. Our friends no longer trust us, and our adversaries no longer fear us. We’ve created a huge vacuum in that part of the world, and ISIS has moved in big-time. Now we have a caliphate in Syria and Iraq.

ON THE RISE OF ISLAMONAZI TERRORISM

We have had a massive spread in the number of Al Qaeda–type organizations. The RAND study that came out last summer said that between 2010 and 2013 there had been a 58 percent increase worldwide in the number of Al Qaeda–type organizations. We used to worry, at 9/11, just about Afghanistan; now it stretches from Mali and Nigeria in West Africa, across North Africa, through the Middle East, all around into Indonesia, where you’ll find potential sanctuaries and safe harbors for Salafi Islamists, the terrorists, the Al Qaeda types. It’s a very dangerous situation. I think the threat is growing steadily, and I think our capacity to deal with it is rapidly diminishing.

ON JIMMY CARTER'S SIGH OF RELIEF

I look at Barack Obama and I see the worst president in my lifetime, without question—and that’s saying something. I used to have significant criticism of Jimmy Carter, but compared to Barack Obama and the damage he is doing to the nation—it’s a tragedy, a real tragedy, and we are going to pay a hell of a price just trying to dig out from under his presidency.

Several years ago he crossed the line from enabling America's enemies to collaborating with them. In a time of war that's called treason and if proven it's a hanging offence.

let's take republican/democrat out of the equation. who really listens to dick cheney? last time i checked he was busy lining his pockets with money from haliburton via a war he created that cost hundreds of thousands of lives. anybody who gives credence to this war profiteer is beyond foolish.

Takes one to know one. He was, by far, the worst vice president ever. Got us into multiple unnecessary wars while lining his own pockets with endless amounts of cash. He used Bush to his advantage to push his own warmongering agenda. He's also a massive hypocrite. Claims to be part of the "less government" party, but is constantly championing larger government via "defense" spending, even though we all know it's offense spending which makes him richer through Haliburton government defense contracts. He might as well be a pot calling the kettle black. Politicians all suck. It's irrelevant which party they represent.