The Incredible Economic Benefits of Right-to-Work

This week Wisconsin became the 25th state in the union to pass and sign into law so-called “right to work” legislation. Despite the pejorative light oftentimes associated with right to Work (RTW) laws, in reality all they do is proscribe the requirement that a worker join or pay dues to a union as a qualification for employment. 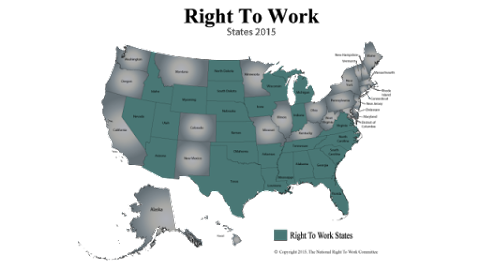 Unions often view laws removing compulsory union membership for work in the private sector as “anti-union,” while advocates of right to work laws maintain it’s a matter of personal liberty and economic freedom. They argue that workers in given trades or industries should have the option to choose whether to join a union or not. Arguably, if a union is doing a good job representing the interests of its members, it should not be threatened by the freedom to choose, as the benefits of union membership would be self-evident.

Even some union leadership supports such a sentiment.

Gary Casteel, the Southern region director for the United Auto Workers, explains, “This is something I’ve never understood, that people think right to work hurts unions. To me, it helps them. You don’t have to belong if you don’t want to. So if I go to an organizing drive, I can tell these workers, ‘If you don’t like this arrangement, you don’t have to belong.’ Versus, ‘If we get 50 percent of you, then all of you have to belong, whether you like to or not.’ I don’t even like the way that sounds, because it’s a voluntary system, and if you don’t think the system’s earning its keep, then you don’t have to pay.” 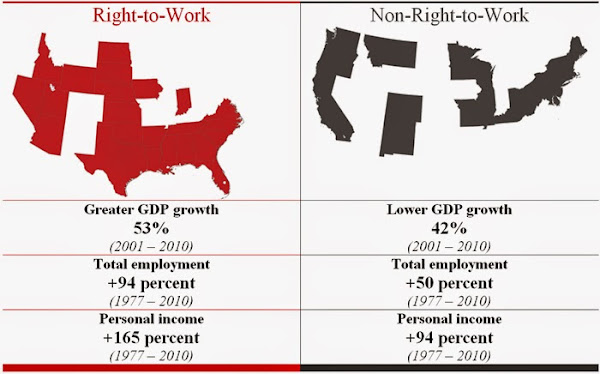 One cannot be a student of history without recognizing the tremendous contributions unions made to the emergence of the middle class in early to mid 20th century America. They significantly improved working conditions, workweek hours, and compensation levels.

In today’s highly competitive economy, their focus seems to have changed, as they seem to be primarily political entities today, with compulsory union dues used mostly for amassing power in the political arena, and spent on candidates and causes that some members may object to. Even Bob Chanin, former top lawyer for the National Education Association, admitted that in his farewell speech a few years ago. “It’s not about the kids…it’s about power,” he said.

According to Department of Labor statistics, only about 7% of America’s private sector workforce is unionized. In post World War II era, it was nearly 40%. The trend is reversed for public employees, where 60 years ago the unionized segment of the public employees workforce was less than 10%, while it currently is nearly 37%. Logic leads one to surmise that maybe all those “evil corporations” have gotten it right, and are providing pay and benefits at a level that employees are satisfied with. While the same logic might lead us to believe that, following those trends, it is “evil government” that is taking advantage of employees and must be represented by collective bargaining.

Average wages do tend to be slightly lower in right to work states, as reported by The Wall Street Journal last year. But the differences may be attributable to other factors. As the Journal explained, “Many economists say when differences in cost of living are taken into account, wages are roughly the same—or even higher—in right-to-work states.” When looking at a map of non-right to work states, geographical and cost of living factors seem to affirm that distinction.

New company and new product growth is significantly greater in RTW states. During that same period, annual percentage growth in patents granted was 33% in RTW states, and only 11% in non-right to work states.

Income growth rates are higher in RTW states as well. The percentage growth in real personal income was 26.0% in RTW states, while non-right to work states grew at 19.0%.

Even health insurance coverage in RTW states fared better. Note that this data was gathered before implementation of Obamacare. The percentage growth in number of people covered by employment based private health insurance was 8.5% for RTW states, and 0.7% for non-right to work states.

Consequently, based on National Institute for Labor Relations research, right to work states create more private sector jobs, enjoy lower poverty rates, experience more technology development, realize more personal income growth, and increase the number of people covered by employment-based private health insurance. Clearly when looking at the big picture, the economy of a state is more likely to be more robust when the workforce has the freedom to choose.