The Chicago Sun-Times reports that the Chicago Public School system is facing a catastrophic penalty as a result of decades of borderline criminal Democrat fiscal mismanagement. 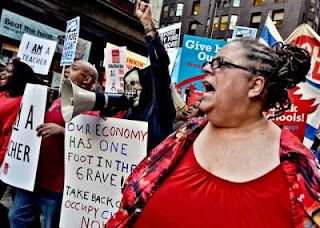 Chicago’s deep financial problems worsened Friday as a Wall Street bond-rating agency dramatically downgraded the credit of the city’s school system — triggering penalties that could come to more than $200 million.

Friday’s report from Fitch means CPS has dropped below the threshold for terminating the deals. According to Fitch, CPS could be forced to pay $263 million in penalties as a result...

...Even after closing a record number of schools, cutting administrative costs and raising property taxes, CPS has projected a budget deficit of more than $1 billion for the coming school year.

Interestingly, the Chicago Democrat machine is being torn asunder by the conflict between the unions and city leaders like Rahm Emanuel. Union leadership continues to fleece taxpayers while insisting that their unsustainable retirement benefits can be maintained. Emanuel, faced with these mathematical impossibilities, is suggesting that the unions must be reined in. Pass the popcorn.

The rocky relations between the mayor — who appoints the school board — and the Chicago Teachers Union haven’t improved since the strike. And the teachers’ current contract can end June 15. CTU is heavily backing challenger Jesus “Chuy” Garcia in an effort to unseat Emanuel in the April 7 runoff election... Garcia said the Fitch downgrade “is the latest example of the consequences of Mayor Emanuel’s fiscal mismanagement.”

Barbara Byrd-Bennett, Emanuel’s chief executive for CPS, said: “It is not a secret that Chicago Public Schools has long faced serious fiscal challenges that are primarily driven by a broken pension system — something the recent downgrades cite as the most critical issue that simply must be addressed to maintain CPS’ fiscal stability. Without reforms, CPS will be forced to decide between funding the pensions of retirees and funding the education of its students.”

Broadcaster Stephen A. Smith received a lot of attention a few days ago for suggesting that Blacks should vote Republican in at least one election to send a message to both parties.

I suggest that such a movement would do well to start in Chicago, where the infernal alliance of the Democrat Party and teachers unions have conspired to destroy the urban educational system, sentencing generations of minority children to poverty.