AS RUSSIAN WAR DRUMS SOUND: Obama disses NATO chief on his visit to the U.S. 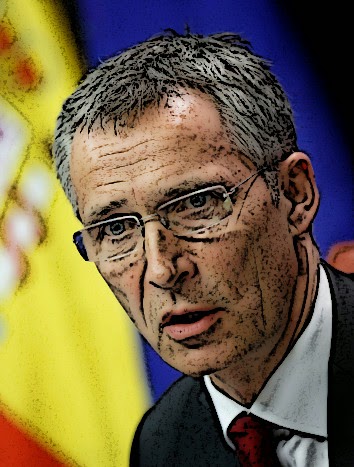 Following a pattern of talking only to our enemies and not to Congress or allies such as Israeli Prime Minister Benjamin Netanyahu, Obama apparently has decided to ignore Stoltenberg during a three-day visit to the U.S. According to Bloomberg, Stoltenberg's office requested a meeting in advance of the visit, but heard nothing back from the White House.

The president presumably is too busy explaining to the Iranian people why we must sign a nuclear Munich deal with an enemy whose leaders shout, "Death to America!"

Stoltenberg, twice the prime minister of Norway, met with Canadian Prime Minister Stephen Harper on Monday, to discuss the upcoming NATO summit, the rising threat of the Islamic State worldwide and Russia's aggression toward and annexation of Ukraine.

The new NATO chief is well aware of increasing Russian bomber patrols that include mock attack runs on NATO members Britain and Sweden along with threats to aim nuclear missiles at Danish warships. The patrols have also buzzed U.S. warships, overflown Guam and approached within cruise missile range of Los Angeles.

"It is hard for me to believe that the president of the United States has not found time to meet with the new secretary general of NATO given the magnitude of what this implies, and the responsibilities of his office," says Kurt Volker, who served as U.S. permanent representative to NATO under both Obama and President George W. Bush.

This includes the conventionally armed KH-101, which Russia has developed to attack critical infrastructure such as the U.S. electrical grid, and a sea-based variant of the KH-101 reportedly being deployed on Russian Severodvinsk-class nuclear attack subs.

Meantime, we have eliminated our only sub-launched nuclear cruise missile and have curtailed production of the potent and feared Tomahawk.

Admiral Viktor Chirkov, commander of Russia's Navy, took the occasion of Russia's Submariner Day to recently note that Russian submarine activity has increased 50% since January 2014. Besides trolling off our eastern seaboard, Russia says its nuclear subs will soon resume patrols in the Southern Hemisphere after a nearly two-decade absence.

In addition to its annexation of Crimea, Russia has moved troops and weapons into eastern Ukraine as it places nuclear-capable missiles in striking distance of our NATO allies.

As we refuse to send lethal defensive weaponry to aid Ukraine, Russia's advanced SU-30 fighter jets have been practicing attack runs on NATO warships in the Black Sea, including the U.S. missile cruiser Vicksburg.

There's certainly enough going on that threatens both NATO and American interests for President Obama to have set aside a few moments with NATO Secretary General Stoltenberg. But then, maybe our apparent lack of concern and sense of urgency is part of that "flexibility" Obama promised the Russians regarding missile defense upon his reelection.

Russian President Vladimir Putin clearly has his nation's national security and strategic interests at heart. We wish our commander-in-chief felt the same way about ours.

This is getting weird.We knew,or at least many of us did,that this guy wasn't a normal human being that was voted into our highest political office.TWICE.Now we get to watch him fall apart,inflicting his perpetual petulance on the nation until he has to leave.It will be a real nail-biter to see which folds first,the nation or the naive.