The Right Scoop has the video and the transcript: 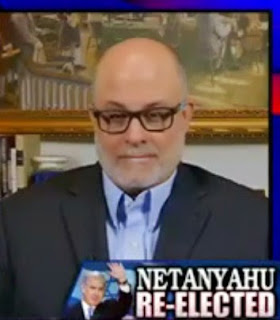 Eric Holder said that this nation is full of cowards because we won’t have a discussion about race.

Well I think this nation needs to have a discussion about what’s going on in this White House and this administration, about anti-Semitism.

Because this White House is reaching out to Sharpton, the Muslim Brotherhood, CAIR, all these radical nut jobs and groups.

Their policies which are — it’s not just Netanyahu. They’re willing to throw Israel over the side for the Islamo-regime in Tehran. This president’s former relationships with Khalidi, the professor at Columbia now, with Wright, the so-called reverend from Chicago — this president has a lot to answer for and his conduct is contemptible.

I don’t care how many liberal Democrat donors he has who are Jewish. He can hide behind them all he wants. But Mr. Holder, Mr. Obama, let’s have a national discussion about the anti-Semitism that reeks from your administration!

Mark Levin noted that Obama doesn't like Democracy, he doesn't like Netanyahu; he has more ability to work with dictators and genocidal maniacs than with people elected democratically.