Why does he ignore this one simple lesson from the Eighties? 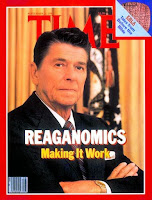 President Obama pushed hard his “middle class economics” message during a Cleveland speech yesterday. And in the process, offered his take on recent US economic history:

For the first eight years of this century, before I came into office, we tried trickle-down economics. We slashed taxes for folks at the top, stripped out regulations, didn’t make investments in the things we know we need to grow. At the end of those eight years, we had soaring deficits, record job losses, an economy in crippling recession. In the years since then we’ve tried middle-class economics. Today we’ve got dramatically lower deficits, a record streak of job creation, an economy that’s steadily growing.

The president modified his usual argument just a bit to frame the economic battle as middle-out Obamanomics vs. trickle-down Bushonomics, But in the past, he has subtlety lumped Bushonomics in with Clintonomics and Reaganomics. All part of the same tax-cutting, regulation-slashing, neoliberal wave from 1981 through 2008 that overall benefited the 1% at the expense of everyone else.

Yet despite the president’s critique, many voters probably recall the 1980s and 1990s with great fondness. For instance: A 2014 Quinnippiac survey founds American consider Ronald Reagan and Bill Clinton to be the best two postwar presidents.

Both Reagan and Clinton pushed deregulation. Both cut taxes for wealthier Americans. Yes, inequality rose. The share of market income going to the top 1% doubled from 1981 through 2001. But it was also a period when nonfarm payrolls increased by 42 million. The employment rate rose to 63% from 59%. Median incomes — when adjusted for transfers, taxes, benefits, and changing household size — rose by 30%. While the middle class shrank, it was “primarily caused by more Americans climbing the economic ladder into upper-income brackets,” the New York Times recently noted. A recent Brookings study found that through the 1980s and 1990s, “households of virtually every type experienced large, steady income gains, whether they were headed by men or women, by blacks, whites or Hispanics, or by people with high school diplomas or college degrees.” Clearly there was a lot happening during those decades other than just the rich getting richer. 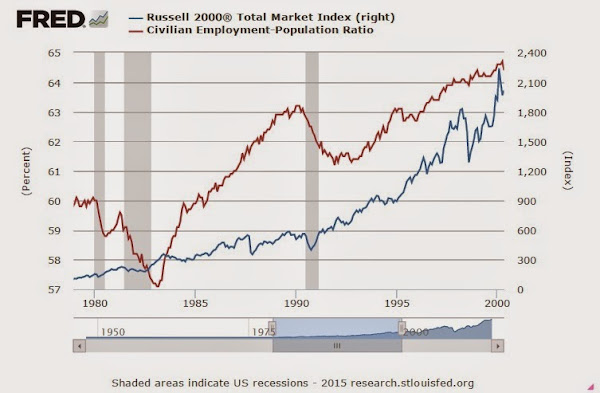 Obama’s negative take also ignores what expectations were like when the tumultuous 1970s ended. As I have written: “In 1980, there were plenty of forecasters who thought the American standard of living would decline over coming decades. Just look at all the dystopian films back then: Blade Runner, Soylent Green, Americathon, Escape from New York. Gloomy stuff.” And it wasn’t just Hollywood. Economist Scott Sumner:

Suppose you had gotten a room full of economists together in 1980, and made the following predictions:

1. Over the next 28 years the US would grow as fast as Japan, and faster than Europe (in GDP per capita, PPP.)

2. Over the next 28 years Britain would overtake Germany and France in GDP per capita.

And you said you were making these predictions because you thought Thatcher and Reagan’s policies would be a success. Your predictions (and the rationale) would have been met with laughter.

But that is just what happened. The growth, I mean, not the laughter. And there is this interesting argument for the efficacy of Reaganomics by Bruce Bartlett:

Liberals argue that the real economic effects of Reagan’s policies show that they failed. However, I believe that these critics overlook the enormous importance of breaking the back of inflation at a relatively small economic cost — certainly far less than any economist would have thought possible in 1981. Reagan’s results should be measured against the (incorrect) expectation that a far more severe economic downturn would be needed to reduce inflation. On that basis, his policies were overwhelmingly successful.

Or as Bill Clinton’s Council of Economic Advisers put it in 1994: “It is undeniable that the sharp reduction in taxes in the early 1980s was a strong impetus to economic growth.”

Hmm. Maybe it’s smart that the president has changed his argument.