FOUNDER OF GREENPEACE: Why I am a Climate Change Skeptic

I am skeptical humans are the main cause of climate change and that it will be catastrophic in the near future. There is no scientific proof of this hypothesis, yet we are told “the debate is over” and “the science is settled.” 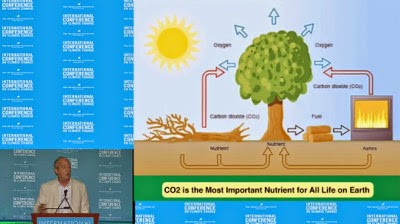 My skepticism begins with the believers’ certainty they can predict the global climate with a computer model. The entire basis for the doomsday climate change scenario is the hypothesis increased atmospheric carbon dioxide due to fossil fuel emissions will heat the Earth to unlivable temperatures.

In fact, the Earth has been warming very gradually for 300 years, since the Little Ice Age ended, long before heavy use of fossil fuels. Prior to the Little Ice Age, during the Medieval Warm Period, Vikings colonized Greenland and Newfoundland, when it was warmer there than today. And during Roman times, it was warmer, long before fossil fuels revolutionized civilization.

The idea it would be catastrophic if carbon dioxide were to increase and average global temperature were to rise a few degrees is preposterous.

Recently, the Intergovernmental Panel on Climate Change (IPCC) announced for the umpteenth time we are doomed unless we reduce carbon-dioxide emissions to zero. Effectively this means either reducing the population to zero, or going back 10,000 years before humans began clearing forests for agriculture. This proposed cure is far worse than adapting to a warmer world, if it actually comes about.

By its constitution, the IPCC has a hopeless conflict of interest. Its mandate is to consider only the human causes of global warming, not the many natural causes changing the climate for billions of years. We don’t understand the natural causes of climate change any more than we know if humans are part of the cause at present. If the IPCC did not find humans were the cause of warming, or if it found warming would be more positive than negative, there would be no need for the IPCC under its present mandate. To survive, it must find on the side of the apocalypse.

The IPCC should either have its mandate expanded to include all causes of climate change, or it should be dismantled.

Climate change has become a powerful political force for many reasons. First, it is universal; we are told everything on Earth is threatened. Second, it invokes the two most powerful human motivators: fear and guilt. We fear driving our car will kill our grandchildren, and we feel guilty for doing it.

Third, there is a powerful convergence of interests among key elites that support the climate “narrative.” Environmentalists spread fear and raise donations; politicians appear to be saving the Earth from doom; the media has a field day with sensation and conflict; science institutions raise billions in grants, create whole new departments, and stoke a feeding frenzy of scary scenarios; business wants to look green, and get huge public subsidies for projects that would otherwise be economic losers, such as wind farms and solar arrays. Fourth, the Left sees climate change as a perfect means to redistribute wealth from industrial countries to the developing world and the UN bureaucracy.

So we are told carbon dioxide is a “toxic” “pollutant” that must be curtailed, when in fact it is a colorless, odorless, tasteless, gas and the most important food for life on earth. Without carbon dioxide above 150 parts per million, all plants would die.

At 400 parts per million, all our food crops, forests, and natural ecosystems are still on a starvation diet for carbon dioxide. The optimum level of carbon dioxide for plant growth, given enough water and nutrients, is about 1,500 parts per million, nearly four times higher than today. Greenhouse growers inject carbon-dioxide to increase yields. Farms and forests will produce more if carbon-dioxide keeps rising.

We have no proof increased carbon dioxide is responsible for the earth’s slight warming over the past 300 years. There has been no significant warming for 18 years while we have emitted 25 per cent of all the carbon dioxide ever emitted. Carbon dioxide is vital for life on Earth and plants would like more of it. Which should we emphasize to our children?

The IPCC’s followers have given us a vision of a world dying because of carbon-dioxide emissions. I say the Earth would be a lot deader with no carbon dioxide, and more of it will be a very positive factor in feeding the world. Let’s celebrate carbon dioxide.

Patrick Moore (pmoore@allowgoldenricenow.org) was a cofounder and leader of Greenpeace for 15 years. He is now chair and spokesman for Allow Golden Rice.