THIS IS WHY Hillary's email scandal captured the media's attention

Because President Jarrett wanted it that way.

Writing at The New York Post, Edward Klein reveals that "Valerie Jarrett leaked to the press details of Hillary Clinton’s use of a private e-mail address during her time as secretary of state." 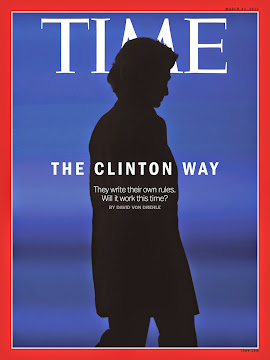 But she did so through people outside the ­administration, so the story couldn’t be traced to her or the White House... In addition, at Jarrett’s behest, the State Department was ordered to launch a series of investigations into Hillary’s conduct at Foggy Bottom, including the use of her expense account, the disbursement of funds, her contact with foreign leaders and her possible collusion with the Clinton Foundation.

Six separate probes into Hillary’s performance have been ­going on at the State Department. I’m told that the e-mail scandal was timed to come out just as Hillary was on the verge of formally announcing that she was running for president — and that there’s more to come.

...“Obama and Valerie Jarrett will go to any lengths to prevent Hillary from becoming president,” a source close to the White House told me. “They believe that Hillary, like her husband, is left of center, not a true-blue liberal.” ... If she gets into the White House, they believe she will compromise with the Republicans in Congress and undo Obama’s legacy.

“With Obama’s approval,” this source continued, “Valerie has been holding secret meetings with Martin O’Malley [the former Democratic governor of Maryland] and [Massachusetts Sen.] Elizabeth Warren. She’s promised O’Malley and Warren the full support of the White House if they will challenge Hillary for the presidential nomination.”

And the media continue to pile on, almost as if they were taking orders from the White House.

Reliable progressive news outlets like the BBC, the New York Daily News, and the Associated Press have all weighed in decisively against the Hillster.

Suffice it to say that "Email-gate" barely makes the top 10 Obama administration scandals, so a jaded observer would wonder why the Democrat-Media complex is so focused on this particular outrage.

Because the media take their marching orders from President Jarrett.

And, according to Klein, President Jarrett is at war with Hillary because the Clintons were said to have lobbied Democrats to distance themselves from Obama during the 2014 midterms. Jarrett perceived Hillary as attempting to displace Obama as the titular head of the Democrat Party.

The media's focus on Hillary's email scandal highlights something interesting. Now you know who really controls the media.

While I'm basking in the schadenfreud, I'm also mindful that for every public scandal that comes out of this administration there's always a worse private one lurking beneath. We know what they are telling us. What are they NOT telling us?

Hah - 'time to go out and buy a few cases of popcorn.

It will be wonderfully entertaining to watch the top players in the Democratic Party tearing each other to shreds.

The lying Obama white House is giving orders to the state run media to trash Hillary
Hillary is dead meat..

WHY?????? emails will surface showing classified information was sent from Hillary's private email to people outside of the Government
Hello President Walker

Wasn't lying Obama a joke .. he tells Obama run CBS reporter he heard about Hillary's email mess in the news.. yet lying Obama was sending emails to Hillary's own private email account for years
The Washington PARTY made up of the democrats and Rino GOp have run America into the ground

TIME FOR A CONSERVATIVE 3RD PARTY OF AMERICANS... FOR AMERICANS

Why all the fear from Jarrett that Clinton will co-operate with ideas other than Alynsky's. Does anyone really believe she'll undo anything Obama has implemented. Of course I'm sure there's worry she can't lie as well as Obama but that's a given. I think it has more to do with pure hatred of the Clintons.

Anonymous is right: if we had any idea of what's actually going on right now behind the scenes at the White House, we'd be up in arms.