TREY GOWDY: Hillary must turn over her illegal email server or "face the full powers of the House"

Gowdy’s letter firmly requests that Clinton turn over her email server by April 3rd to a neutral third party, or he plans to litigate: 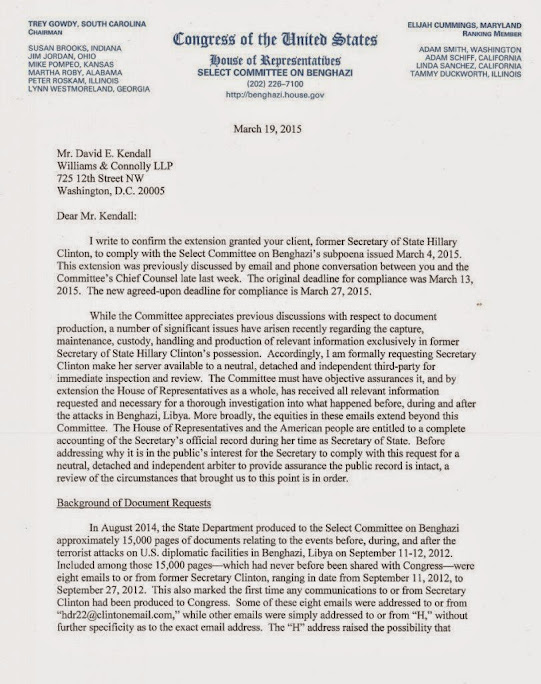 Gowdy, a former prosecutor, has stressed that the committee does not have police powers and therefore cannot force the former Secretary of State to turn over her property.

“The Committee must have objective assurances it, and by extension the House of Representatives as a whole, has received all relevant information requested and necessary for a thorough investigation into what happened before, during and after the attacks in Benghazi, Libya.”

“More broadly, the equities in these emails extend beyond this Committee. The House of Representatives and the American people are entitled to a complete accounting of the Secretary’s official record during her time as Secretary of State.”

In the latter half of the letter, Gowdy warns Mrs. Clinton that if she refuses to act, she’ll be turned over for prosecution on the charge of contempt to the Speaker of the House: 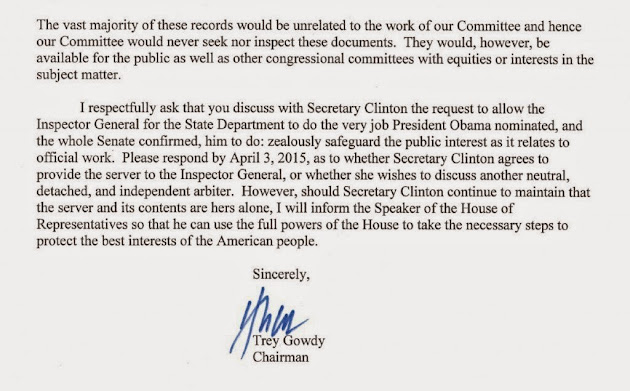 Mrs. Clinton ran her own server reportedly from her Chappaqua, New York home. In a news conference last week, her explanation was one of convenience.

A perceived lack of precautions left the former Secretary of State’s server susceptible to online criminal activity. Some ‘white hat hackers‘ have claimed the software and email program she used left her server vulnerable to illegal entry.

“Hillary Clinton didn’t take a basic precaution with her personal e-mail system to prevent hackers from impersonating or “spoofing” her identity in messages to close associates, according to former U.S. officials familiar with her e-mail system and other cyber-security experts.”

“This vulnerability put anyone who was in communication with her clintonemail.com account while she was secretary of state at risk of being hacked. Clinton said at the United Nations last week that there were no security breaches of her personal e-mail server, which she used to send and receive more than 60,000 professional and personal e-mails. But former cyber-security officials and experts told us that there were gaps in the system.”

“What if Dick Cheney, not Hillary Clinton had deleted 30,000 emails from a private, at home server?”

Mrs. Clinton said she handed over 30,000 of her emails to the State Department and deleted another 30,000 because she claimed they were “private.” The criteria she gave to the press to determine what is public, and what is private, has been inconsistent.

The Associated Press is also suing the former Secretary of State for access to the remaining emails.

Ted Kennedy sank his presidential hopes at Chappaquiddick, while Hillary scuttled hers at Chappaqua.

Not to sound too overly naïve or skeptical, but - in 25 words or less - just what are the "Full Powers of the House"? Seems to me that they are a dysfunctional out of work lawyers who do little if anything other than babble for three days a week with little constructive result apparent to the citizenry. The Clinton Machine (dba "The Democratic Party) won't lose any sleep over the rattling of Styrofoam swords.

What about local prosecutors?? You think they can find some sort of crime, like grand theft, destruction of evidence, or any of the other myriad of crimes Hilary has committed and get a search warrant and seize the damn thing.

Full, toothless, powers of a compromised house, full of corrupt hypocrites who will do nothing to hold any of their fellow corrupocrats accountable for their crimes, theft and fraud upon the people they are supposed to represent. Pathetic.

Nothing will come from this grandstanding. No one will go to jail, no one will be fined, just a bunch of criminals counting stolen money.

I'm with Phil. It looks like Gowdy has met the Tar Baby.

Anonymous said...
This comment has been removed by a blog administrator.
3:23 PM