WHITE HOUSE: Yemen a success story for Obama foreign policy even as country falls to rebels

Some days you can't tell whether The Onion has hacked a news site. 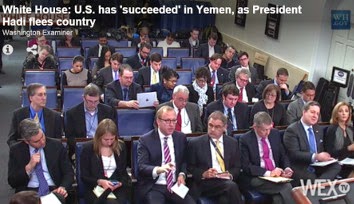 A White House spokesman said American efforts in Yemen are a "template that has succeeded," even as President Abed Rabbo Mansour Hadi was forced to flee the country by boat.

White House press secretary Josh Earnest on Wednesday said that the U.S. still had Yemeni extremists in its crosshairs.

...Earnest told reporters that U.S. officials were not aware of Hadi's destination but insisted that American officials still had a level of control over the chaotic situation.

"We have the ability to continue to apply pressure on the extremists," Earnest told reporters. "They are still in the crosshairs of U.S. security forces."

Yes, the "extremists" (misunderstanderers of Islam, no doubt) are "in the crosshairs" even though U.S. Special Forces evacuated the country just a few days ago.

You simply must listen to Earnest explain that Yemen is a success story.

Or perhaps this is just another psychological ploy by the smartest President ever, whose stated strategy is "leading with his from behind".

Update: Can you say "World War III"? "Saudis Prepare to Deploy in Yemen for Iran Showdown".

Obama tricked the terrorists into coming out into the open. Know we know where they are. Obama is a genius!

Thank you, George Orwell. I now see that failure is really success.