8 KEY TAKEAWAYS: A Deep Dive into the Scandalous FISA Warrant Used to Spy on the Trump Campaign

For those who haven't had the time to review the 412-page FISA application that was used to spy on the Trump campaign, I've culled a few key highlights.

1. The Application Lied About Carter Page

Carter Page is described as "an agent of a foreign power", which was and is clearly not the case. Carter Page is walking around free as a bird, giving interviews to anyone who asks, and stating that the FBI lied about him repeatedly.

2. The Application Contradicts Itself From the Outset

After describing Page as an agent of a foreign power, the application goes on to say that Page is currently the subject of "targeted recruitment" by Russia. How can it be that Page is simultaneously: (a) a clandestine agent of Russia; and (b) being recruited by Russia to serve as an agent? Obviously, these assertions are sloppy, nonsensical and -- ultimately -- flat-out lies. 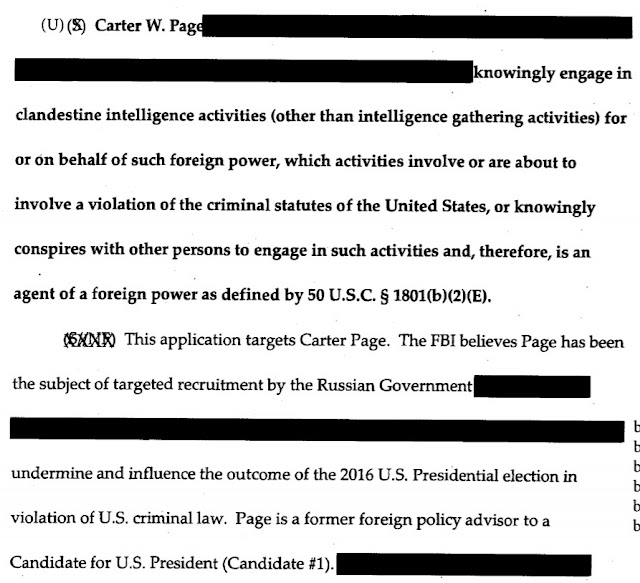 The DNC-funded former MI6 agent Christopher Steele told the FBI that Page had met with two Russian officials during his visit to Russia. Steele went on to say that Page had been offered compromising material on the Clinton 2016 campaign. Page denies all of this -- the meetings and being offered kompromat -- and the fact that Page has never been charged with anything would indicate that Steele fabricated the story and then lied to the FBI about it.

4. The FBI failed to disclose that Clinton/DNC was funding Steele's work

The FISA application notes an "identified U.S. person" (Fusion GPS's Glenn Simpson) and "Source #1" (Christopher Steele) but never disclosed the fact that the DNC and the Clinton campaign had funded -- through the law firm of Perkins Coie -- Steele's activities. The application instead tosses an oblique reference to Simpson's motivation ("was likely looking for information that could be used to discredit [Trump's] campaign"). In other words, the FBI hid from the court the fact that the Democrat apparatus was funding Steele's activities and that all of his work product needed to be viewed through the lens of a partisan hit-job. 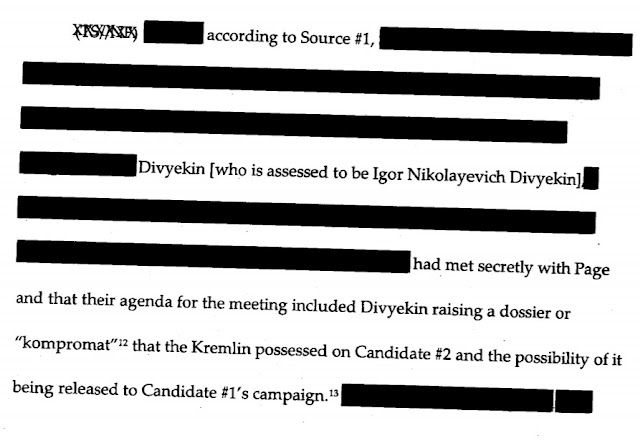 5. A Circle of Laundered Lies

The application goes on to reference a Michael Isikoff article in Yahoo! News that described Page's alleged activities and possible collusion by the Trump campaign with Russia. This information is treated as a separate piece of evidence in the bogus application, but was just laundered material from Steele to Isikoff.

James Comey signed off on the first bogus FISA application, which he clearly knew was built on a foundation of lies. 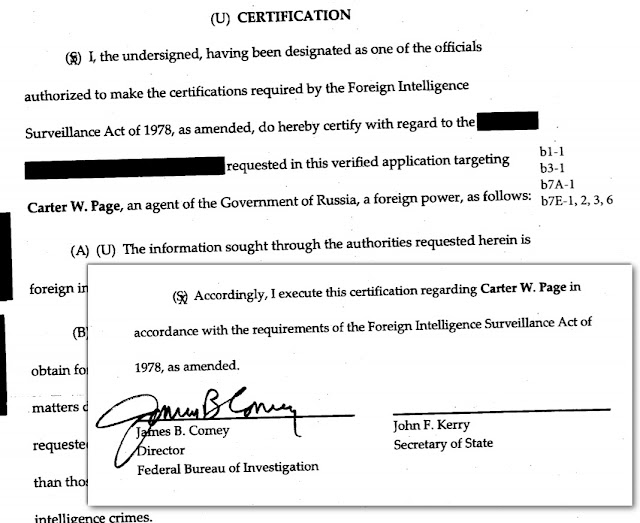 7. The Application Lied About Steele and the Press

The FBI knew that Perkins Coie was a cutout for the Democrat Party and the Clinton campaign. They knew the firm had hired Fusion GPS and Glenn Simpson. They also knew that Simpson had engaged Steele to manufacture the bogus "dossier". The FBI later terminated its relationship with Steele after determining that he had leaked information to the press. Yet on the very same page, the FBI states that Steele "did not directly provide this information to the press." 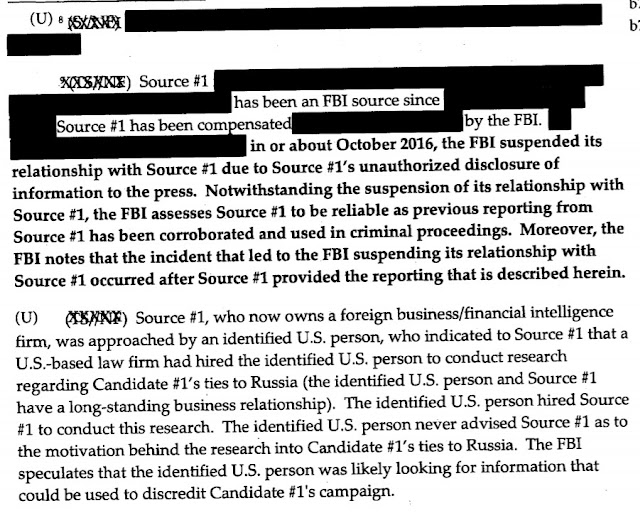 ...the DOJ and FBI falsely attested to the FISA court not once, not twice, not thrice, but four (!) separate times that Steele was not the source of Isikoff's September 23 article, which DOJ used to corroborate claims from Steele's dossier. In fact, Steele was the only source... 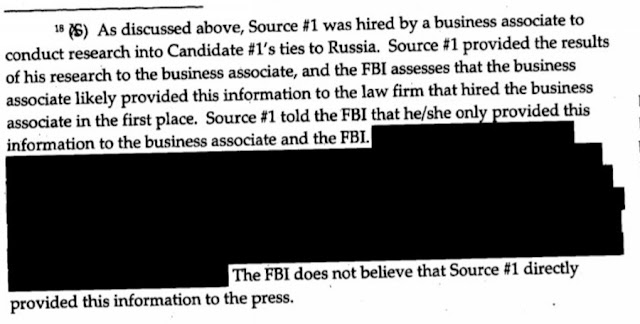 FBI director James Comey certified the accuracy and completeness of the FISA application targeting Carter Page by signing the document. He essentially stated that the Steele Dossier was verified as true. He lied. Because just a few months later, he stated -- under oath -- that the Dossier was "salacious and unverified".

Comey has, it would appear, committed a very serious crime. 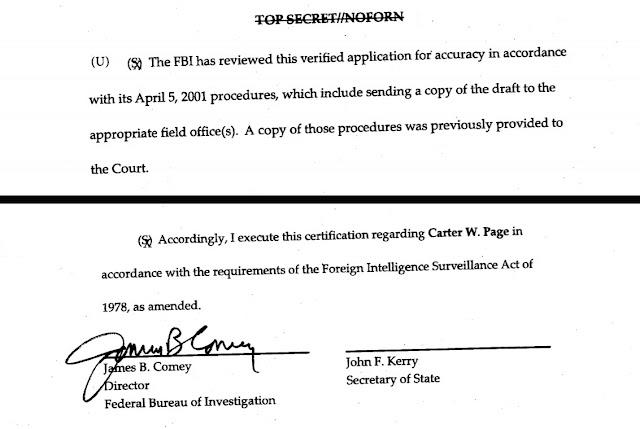 A Sloppy and Stupid Hit Job by the Obama Administration

How could a FISA application be this sloppy, this nonsensical, this criminal and idiotic?
The answer is simple:
They. Thought. Hillary. Would. Win.
The entire Mueller special counsel was predicated upon a mountain of lies. It needs to be terminated today.

This is the greatest political scandal in American history.
And we've only seen the tip of the iceberg.
Hat tip: BadBlue Uncensored News. Also see: The Timeline of Treason.

Thank you. That was excellent

Couple of things.
*Your points 1) and 2). This could be read as they believed he was a foreign agent BECAUSE he had been the target of recruitment.

*The Mueller investigation should not be stop yet. I think Trump knows the longer it goes on the worse it looks - for the Democrats!

It remains to be seen as to whether or not Trump will ever see justice done regarding this despicable attempt to overthrow the results of a legitimate US presidential election.

One thing seems certain (if there is any such thing) and that is there will be no indictment on Trump regarding his firing of James Comey. Still to be known is whether or not there will be a statue of Trump erected, or some other similar expression of gratitude, for removing that stain on the FBI from office. Surely, there will be a charge against Comey forthcoming.

Viewed in its entirety, the level of hypocrisy reached in order to bring this event to a constitutional and civic crisis is beyond anything I've seen in 70 years on this planet. The impact of that claim can only be appreciated by noting that it includes everything the Democrat Party and Co. have EVER done.

To mistersteverino...Trump's justice arrives in 2020.

I think this November will give us the referendum the country needs. BTW, did you happen to hear Hillary Clinton's speech yesterday? Very amusing but the highlight was her rhetorical question,"Why won't President Trump speak up for the American people?"