MOVES AND COUNTERMOVES: Motives Behind the Trump-Putin Press Conference

Let me tell you: You take on the intelligence community — they have six ways from Sunday at getting back at you." -- Sen. Chuck Schumer (D-NY), January 3, 2017

Over the course of the last week alone, we have learned some interesting things about the leadership of the Department of Justice and the FBI:

The Timing of the Mueller Indictments

Just hours before the Trump-Putin summit, Deputy Attorney General Rod Rosenstein released indictments of 12 Russian spies identified by Special Counsel Robert Mueller. Only one problem: the indictments were rehashed accusations from the House Intelligence Committee's months-old report. The timing of the indictments raise questions about the DOJ's intentions with respect to the Trump-Putin summit. Further, as Andrew C. McCarthy points out, 26 of the total 32 subjects indicted by Mueller are unlikely to ever see the inside of a U.S. courtroom. Highlighting the partisan nature of the DOJ's actions, the indictments themselves omit attempted hacks of Republican individuals and organizations.

The FBI Hid a Massive Foreign Hack of Hillary Clinton

While investigating Hillary Clinton's use of a personal email server to conduct all government business, the FBI's lead investigator Peter Strzok was told by the Intelligence Community's Inspector General that virtually all of Clinton's emails had been forwarded to a foreign power, which was not Russia. Clinton's emails included documents classified at the highest level as well as communications with Barack Obama and many other key administration officials. Strzok buried the report and did nothing. 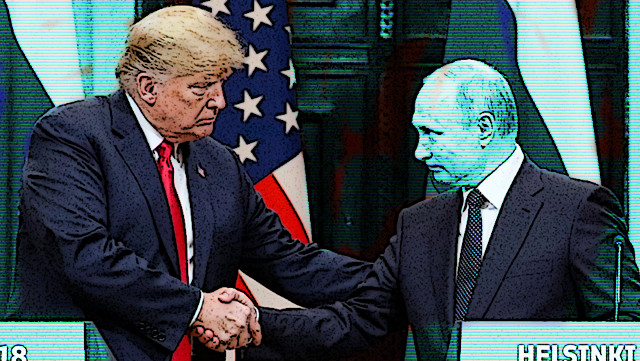 During the joint press conference, Vladimir Putin asserted that Hillary Clinton received $400 million from associates of Bill Browder, a driving force behind the Magnitsky Act.

Further, Putin asserts, the financial transacdtions were “accompanied and guided” by Obama intelligence officials. Putin went so far as to invite Special Counsel Mueller and his team to interview all of the relevant officials.

The session with international reporters ended with Putin being asked whether he had compromising material on Trump, which he dismissed as "nonsense." Even that moment was overshadowed by the extensive comments on election meddling.

Trump once again asserted there was "no collusion."

President Trump denies 2016 election collusion during a joint news conference with Russian President Vladimir Putin in Helsinki... “I didn’t know the president. There was no one to collude with, and there was no collusion with the campaign,” Trump said, suggesting Democrats have used the issue as an excuse for losing. “We ran a brilliant campaign, and that’s why I’m president.”

When asked which side is responsible for damaged relations, Trump said, "I hold both countries responsible."

The statement drew bipartisan criticism back in Washington.

Obama-era CIA director John Brennan, a frequent critic of Trump, tweeted: "Donald Trump’s press conference performance in Helsinki rises to & exceeds the threshold of 'high crimes & misdemeanors.' It was nothing short of treasonous."

Brennan is said by many to be the architect of the Trump-Russia collusion fable. Former U.S. Attorney Joseph DiGenova has gone on record as saying:

We have learned that the crimes were committed by the FBI, senior members of the Department of Justice, John Brennan, Mr. Clapper, Mr. Comey and others associated with the Democratic Party. And Donald Trump and his associates committed no crimes.

...criminal referrals have already been made. And I suggest that Mr. Brennan, who loves to make comments about the process, get himself a good lawyer.

The abuse of intelligence agencies by the Obama administration will, in my view, turn out to be the greatest scandal in American history.

What Does All of This Really Mean?

These are moves and countermoves.

Not only did it overshadow the horrifying performance of Peter Strzok in front of two House Committees, but it also appeared timed to prevent or disrupt the meeting between President Trump and Vladimir Putin. The failure of the indictments to mention the Russians' attempts to hack Republican entities make the partisanship all the more obvious.

President Trump remains an existential threat to the business interests within the apparatus of professional politics...

...The Friday objective of team Mueller/Rosenstein, which includes hundreds of career left-wing DC bureaucrats/officials behind them, was to paint President Trump into a corner ahead of his meeting with Russian President Putin. The media wing of the intransigent state would then use the ridiculous indictment to frame the preferred narrative and remain on offense against President Trump.

President Trump represents a nuclear warhead targeted against the Beltway establishment, including the full spectrum of lobbyists, politicians, media, and bureaucrats.

The fact that this cadre of anti-American forces, with all of the power behind them, lost in 2016 is testament to the enduring strength of the American spirit. November of 2018 signals the next round in our MMA match to reclaim the Republic from these diabolical thugs.

What happened to the first 13 that we indicted back in February? They weren't good enough because they wanted to go to court and fight it, so we had to find another 12 that will never in a million years come to the U.S. to fight the charges?

Don't be so sure that these 12 Russian hackers won't have a lawyer in court assuming that day actually ever comes ... The FBI has NO EVIDENCE just guesses ... but no real evidence ... the chain of custody was broken ... no US court will allow their evidence to be presented ...

The Ghost- won't matter. Rosie used a insurance policy. Moved it to the National Security area, so "classified". Cannot let the lack of evidence get out to those pesky lawyers and stop the plan again.