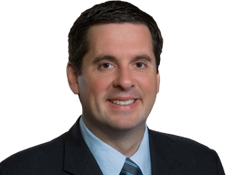 A quick update. Devin Nunes has sent a letter to Chairman Gowdy and Chairman Goodlatte.

In it, Nunes refers 17 highly recognizable names to the joint task force of the Committees on Oversight & Government Reform and the Judiciary for interviews.

Note that the names cut off at a certain political level. Below Sally Yates at DOJ and below Comey at FBI.

This is almost certainly by intent. Without the IG Report on FISA Abuse, it’s too early to move any higher.

As unsatisfying as this may be to some, I consider this to be a good start. Most of these individuals – but not all – have left their positions so enforcement will prove interesting.

The letter is as follows:

The House Permanent Select Committee on Intelligence (the Committee) is conducting an ongoing investigation of FISA abuse and other matters related to certain actions taken by officials at the Federal Bureau of Investigation (FBI) and Department of Justice (DOJ).

During this investigation, the Committee discovered matters that likely fall within the purview of the joint task force of the Committees on Oversight & Government Reform and the Judiciary that is conducting ongoing oversight relating to FBI and DOJ. I refer to your task force these current and former FBI and DOJ employees who may have relevant information:

For the sake of transparency and to keep the American people as fully informed as possible about these matters, the task force should consider interviewing these individuals in an open setting.

This was clearly a coordinated and planned effort. I would add a few names but overall this is a solid beginning.

I hope these people are prosecuted for their treasonous deeds to overthrowing our President. We the American people are getting tired of Congressional hearings like the IRS and Benghazi where the people are guilty BUT NO ONE EVER GOES TO JAIL!