Dear @MaggieNYT, @BrianStelter, @CallumBorchers, @PeterBeinart: Now that the FISA applications prove Mark Levin was correct, will you do the honorable thing?

But let's rewind. I've gotten ahead of myself here.

In March of 2017, Mark Levin ignited a media firestorm by asserting that the Obama administration had wiretapped first candidate, and then President-Elect, Trump. Although he used legacy media's own reports to state his case, Levin was relentlessly assailed by legacy media.

An archetypal example was the loathsome Brian Stelter of the failing CNN network:

Levin emailed me, "Do you deny there were two FISA applications?" I replied: "I don't know. You don't know. The reporting is very murky." https://t.co/uSyUgooRl0

Well, Brain, I mean, "Brian": now that we have clear and incontrovertible evidence that the Trump campaign was illegally spied upon by the Obama administration, will you now issue an apology to Mark Levin? 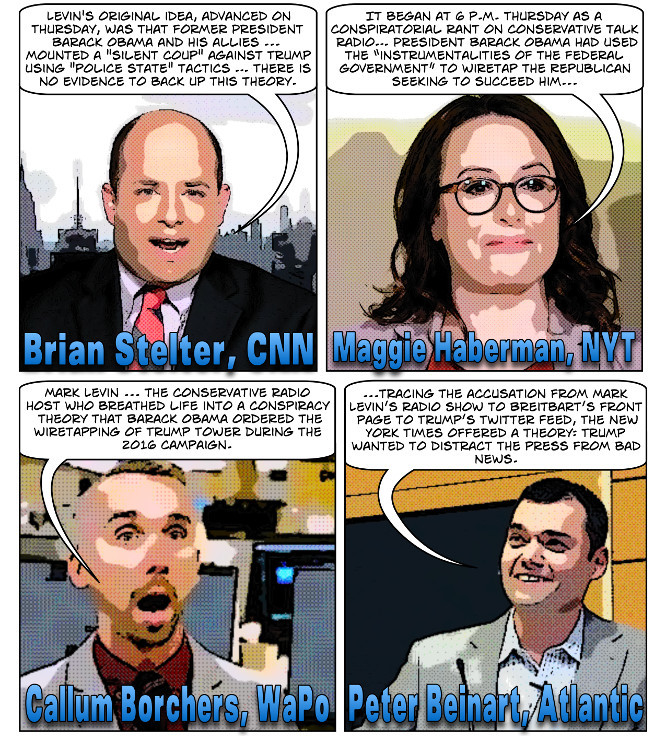 An apology would be the honorable thing to do.

Honorable. Virtuous. And, again, I won't hold my breath *.

* I won't hold my breath unless i'm being driven around on Chappaquiddick Island by a member of the Kennedy family.

Related: 8 KEY TAKEAWAYS: A Deep Dive into the Scandalous FISA Warrant Used to Spy on the Trump Campaign.

The media has prostituted themselves to Obama and the Marxists. Who can credit them with any kind of objectivity or truthfulness?

Just as ALL those talking heads on CNN, NBC, MSNBC etc said to many in Trump's Cabinet, that if THEY had any HONOR, they would RESIGN...Mayhap it's time for the talking heads to RESIGN....that is, if THEY have any HONOR. Of course, since they seem to be more like a STORMY-PROSTITUTE than ANY kind of a fair, balanced, unbiased JOURNALIST, I only expect them to double-down and ask for HUSH MONEY.

All Maggie Haberman does is post the leaks sent to her by Weissman, Schiff, and so on.

I wish some news people could be put in jail, such liars!