“During this investigation, the Committee discovered matters that likely fall within the purview of the joint task force of the Committees on Oversight & Government Reform and the Judiciary,” Nunes wrote Tuesday to Virginia Rep. Bob Goodlatte and South Carolina Rep. Trey Gowdy, the chairmen of the Oversight and Judiciary Committees, respectively.

“For the sake of transparency and to keep the American people as fully informed as possible about these matters, the task force should consider interviewing these people in an open setting,” Nunes added in the letter, which was obtained by The Daily Caller News Foundation.

Nunes has investigated the Justice Department, FBI and State Department over the agencies’ investigations of Trump campaign associates. The Republican has mostly focused on the DOJ and FBI’s handling of the infamous Steele dossier and their applications for Foreign Intelligence Surveillance Act warrants against former Trump campaign adviser Carter Page. 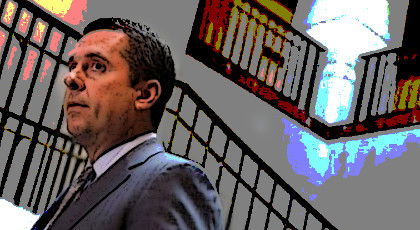 Nunes and other Republicans have alleged that law enforcement officials improperly used the unverified dossier to obtain the spy warrants while also failing to disclose to federal judges that the document was financed by the Hillary Clinton campaign.

Nunes, a close ally of President Trump’s, has also set his sights on the State Department’s involvement in the early months of the Russia investigation.

It has recently been revealed that several Obama administration State Department officials had early exposure to the Steele dossier and exchanged information about Trump associates. It was also revealed in a Senate Intelligence Committee hearing on June 20 that Christopher Steele, the author of the dossier, provided a briefing to State Department officials in October 2016.

The officials on the list who have been directly linked so far to the Trump-Russia investigation are Elizabeth Dibble, the former deputy chief of mission at the U.S. embassy in London, Victoria Nuland, the former assistant secretary of State for European and Eurasian Affairs, and Jonathan Winer, the former special envoy to Libya.

It recently emerged that the information that would eventually spark the FBI’s investigation into the Trump campaign first landed on Dibble’s desk. The Wall Street Journal reported that Dibble received information about a meeting that former Trump aide George Papadopoulos had in May 2016 with Alexander Downer, who then served as the Australian high commissioner to the U.K.

Downer claimed that Papadopoulos mentioned that the Russian government had derogatory information on Clinton. Two weeks before that interaction, Papadopoulos met with a mysterious Maltese professor who said that the Russian government had “dirt” on Clinton in the form of “thousands” of her emails. Papadopoulos has pleaded guilty to lying to the FBI about the timing of his meetings with the professor, Joseph Mifsud. But he did tell FBI agents about Mifsud’s reference to Clinton dirt.

The information from Downer eventually made its way to the FBI. The bureau opened its investigation of the Trump campaign’s ties to Russia on July 31, 2016.

Winer and Nuland also handled information that has since become relevant to the FBI probe. Winer, a former Senate staffer for Kerry, met with Steele, a former MI6 agent, during Summer 2016 and provided State Department officials with a two-page summary of the dossier. Winer also spoke with at least two reporters about Steele for articles published prior to the election.

Nuland was the State Department official who approved an FBI legal attaché to meet with Steele in July 2016. She testified to the Senate Intelligence Committee on June 20 that she first reviewed the dossier in mid-July 2016.