Reparations bill: 600,000 dead was just the down payment

Commission to Study Reparation Proposals for African-Americans Act
To acknowledge the fundamental injustice, cruelty, brutality, and inhumanity of slavery in the United States and the 13 American colonies between 1619 and 1865 and to establish a commission to examine the institution of slavery, subsequently de jure and de facto racial and economic discrimination against African-Americans, and the impact of these forces on living African-Americans, to make recommendations to the Congress on appropriate remedies, and for other purposes... [to address] ...the following questions: 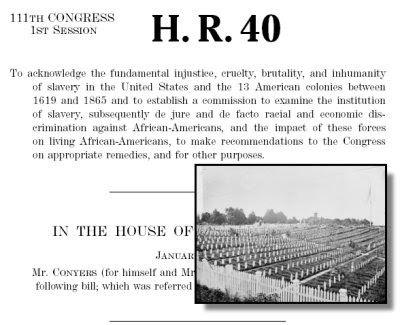 ...Whether, in consideration of the Commission's findings, any form of compensation to the descendants of African slaves is warranted.

I guess the 600,000 Civil War dead represented just the down-payment.