Writing in Egypt's Ahram, Sophie Ibrahim reports on a Nazi war criminal who converted to Islam and lived in Cairo for decades.

In Cairo's most populous district, a tall athletic man who speaks Arabic with an accent moved from one place to another. For 30 years, neighbours and their children would call him the "German man" or "Uncle Tarek" who played table tennis and carried a camera all the time but never allowed himself to be photographed. 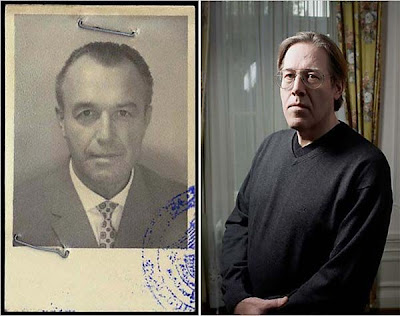 No one seemed to know his real identity -- a Nazi war criminal, concentration camp doctor Aribert Heim. During the 1930s, Heim earned the nickname Dr Death. The most wanted Nazi war criminal was still believed by the Simon Wiesenthal Centre, a Jewish human rights organisation aimed at hunting down Nazis and bringing them to justice, to be at large... Heim, a member of Hitler's elite Waffen-SS and a medical doctor at the Buchenwald, Sachsenhausen and Mauthausen concentration camps, left a son who constantly denied knowledge of his father's whereabouts. Only last week, Ruediger, the son, told the press that his father had died in Egypt in 1992...

...Heim is accused of committing atrocities against Jewish prisoners in Mauthausen, in his native Austria. He allegedly performed operations on prisoners without anaesthesia; removing organs from inmates, then leaving them to die on the operating table; injecting poison, including gasoline, into the hearts of others; and taking the skull of at least one victim as a souvenir.

After living off the radar of Nazi hunters for more than a decade after World War II -- much of it in the German spa town of Baden-Baden where he had a wife, two sons and a medical practice as a gynaecologist -- he escaped capture just as investigators closed in on him in 1962. Investigators suspected that he took shelter in Latin America where his illegitimate daughter lives in Chile. They also received tips that he might be in Saudi Arabia, Argentina or Vietnam.

A travel document found inside his briefcase showed that he entered Egypt in 1963 after driving through France, Spain and Morocco, under his real second name. In the space marked "profession", he was described as a "doctor/ economist" but then crossed it out. Other applications for extension of residency showed that he lived in Egypt under his real name until the late 1970s when bank receipts showed the transfer of money to a Tarek Hussein Farid...

...In the dusty briefcase, there were also research papers he wrote in English that show his attempt to prove that Jews are not Semitic. He planned to send the documents to several figures including former United Nations secretary-general Kurt Waldheim, former US national security adviser Zbigniew Brzezinski, and ex-Yugoslav leader Marshal Tito.

I'm shocked. I really, really am.

at 8:31 AM
Email ThisBlogThis!Share to TwitterShare to FacebookShare to Pinterest
Labels: Carter, extremism, Obama, War