Thank you for contacting me with your views regarding the economic stimulus package. I appreciate your taking the time to do so. 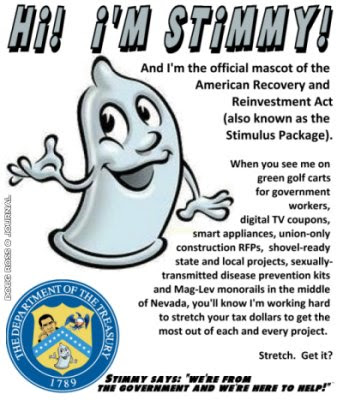 Our nation is in the midst of an unprecedented economic crisis. We have witnessed the collapse of the housing market, the unraveling of our nation's financial institutions, and the evaporation of trillions of dollars that have been invested in the stock market and other retirement and investment funds. I have heard from far too many Mainers who have had to delay their retirement plans because they no longer have the nest egg for which they worked so hard.

Ma'am, did government appendages like Fannie Mae have anything to do with the collapse? Just wondering. I'm not real edumacated, what 'cuz I listen to Twisted Sister albums and play Gears of War and all, but even I've heard of this Fannie Mae. Would that tell us something about government intervention in free markets?

Every day, we hear more reports of massive job losses in communities all across America, and Maine is no exception. Our state's unemployment rate has risen to seven percent, the highest level in 16 years.

Seven percent? Sounds like a recession. So, Sue, how come we have to spend the equivalent of the entire annual discretionary budget of the federal government on a grab-bag of pork? We didn't do that in prior recessions, did we?

I agree with many economists that it is critical that Congress pass an economic stimulus bill to boost the economy and create jobs. Earlier versions of the House and Senate economic stimulus bills were, however, far too expensive and bloated. These versions also included too many provisions that may well be worthwhile, but are more appropriately funded in a regular appropriations bill. That is why I joined with Senator Ben Nelson (D-NE) and a group of my colleagues on both sides of the aisle, including Senator Olympia Snowe, to craft a compromise bill. As a result of our hard work and weeks of negotiations, a group of Democrats and Republicans working together were able to reach a compromise on a more fiscally responsible economic stimulus plan that will cost $100 billion less than previous versions considered by the House and Senate.

Congratulations, you trimmed an $880 billion pork package down to $780 billion... but the true cost is 3.27 trillion. What a bargain!

While this bill is by no means perfect, it will go a long way toward creating jobs and addressing the dire economic challenges faced by our nation.

Just one question: could you name one time in history that printing money and redistributing wealth on an enormous scale led to an economic resurgence?

It is estimated that this bill will create or save 3.5 million jobs in Maine and nationwide over the next two years. Much of this bill will fund transportation, energy and other infrastructure projects that will result in job creation. It includes a temporary increase in federal Medicaid dollars, which will bring $470 million for Maine over the next 27 months. And it provides a significant funding increase for the Pell Grant program, special education funding, and a State Stabilization fund to help states deal with their serious budget shortfalls.

The bill also includes crucial tax relief for low and middle-income families, tax incentives for small businesses, and an increase in safety net programs, as well as funding for energy efficiency and alternative energy development programs.

You can say it: welfare and pork. Welfare, which increases single-parent families and violent crime... and pork projects like the $2 billion FutureGen scam (a Rod Blagojevich special). Sounds stimulating.

Given the substantial investment the federal government is making in this stimulus, it is critical that the taxpayers' money be spent properly. It is for this reason I have pushed throughout the negotiations for measures to ensure the money is wisely spent, including additional funding for agency Inspectors General, the Government Accountability Office, and the creation of a "Recovery Act Transparency Board." As Ranking Member of the Senate Homeland Security and Governmental Affairs Committee, I, along with the Committee's Chairman will soon hold the first Committee hearing on safeguards to protect against waste, fraud, and mismanagement and to ensure accountability and transparency.

May I volunteer the services of Stimmy, the official mascot of the Stimulus package?

Again, thank you for contacting me. This bill will go a long way toward creating jobs and addressing the dire economic crisis faced by our nation.

We're gonna primary your butt in the next election, Collins. Got that? We're going to knock you right out of office and into a job more fitting for a person of your intellectual accomplishments: lobster boat gunwale cleaner.

Collins is either a dunce or a hack who worked her own pork into the bill. We'll soon find out which is the case.

"Given the substantial investment the federal government is making in this stimulus, it is critical that the taxpayers' money be spent properly. It is for this reason I have pushed throughout the negotiations for measures to ensure the money is wisely spent, including additional funding for agency Inspectors General, the Government Accountability Office, and the creation of a 'Recovery Act Transparency Board.'"

In order to spend your money properly, we will need to spend more of your money. Got that?

Linked by: Dear Prez Obama. Thanks!

at 11:46 AM
Email ThisBlogThis!Share to TwitterShare to FacebookShare to Pinterest
Labels: Crime, Democrats