Christopher Gunn of the American Small Business League points out that the Union-only stipulations of the "Stimulus" package actually prevent 27 million small businesses from receiving funds!

As predicted by the [ASBL], President Barack Obama failed to make any reference of his plans to fix existing federal programs designed to direct federal infrastructure spending to America's 27 million small businesses during his address to Congress and the nation Tuesday night. 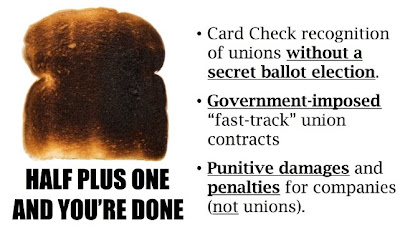 Top economic experts like Dr. Laura Tyson and Carly Fiorina have both acknowledged that directing federal infrastructure funds to small businesses would be the most effective way to stimulate our nation's failing economy and create jobs. Tyson is the former Chair of the U.S. President's Council of Economic Advisers during the Clinton Administration and is currently an economic adviser to President Obama. Fiorina is the former CEO of Hewlett-Packard and a former McCain campaign economic advisor.

In the absence of legislative language to specifically direct the billions of dollars in stimulus bill spending to small businesses, over 90 percent of all prime contracts from the stimulus bill will likely go to the top 2 percent of U.S. firms. This would seem to run contrary to the bill's stated mission of creating jobs.

And since Union bigwigs control the modern Democrat Party, it's counsel that's certain to be ignored.

Just like the Democratic Congress ignored the pleas of small businesses when the Porkies crafted the "Stimulus" package.

National Federation of Independent Business, the nation’s leading small business advocacy organization, is calling on Congress to pass a six-month payroll tax holiday as part of any economic stimulus package considered by Congress in the upcoming weeks...

Tax cuts? Simply because they worked for JFK, Reagan and Bush 43?