Your wife decides to go out with her

You're okay with it, because you get to watch sports and play on the
Internet all night...

You hear her stumble into bed around 4 and laugh knowing she's going to
have a monster hangover....

You wake up the next morning and go outside to the family Volvo, which she used
last night....

You sigh in relief because it's all in one

You circle the car looking for dents and find none.... 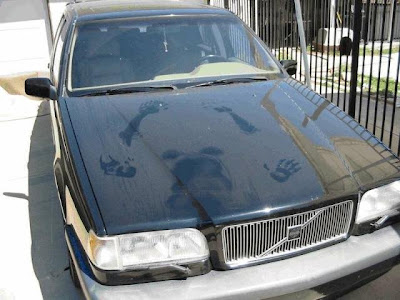 Happy Valentine's Day!
at 8:46 AM
Email ThisBlogThis!Share to TwitterShare to FacebookShare to Pinterest
Labels: Water-cooler

if she was drinking with her mates how did she get the car home for him to find it in the morning ;)

alright you smarmy cunts its clearly a joke...jesus.

I love how people...say "fake" at jokes!! I think a dose of monty python, followed by two doses of good stand up should do the trick oh and supplement with sitcom of your choice....your sense of humour should be back within a month! Nice post!

you have a phat wife

c'mon. She clearly drove into a giant panda on the way home.

Wow, judging from the clear outline of the print she just lay there without moving.

Are you sure it wasn't my wife?

Here's what really happened ... Some husbands who are not secure in their relationships might jump to the wrong conclusions, but what had happened was . . . the wife who was not drunk at all, caught a sudden case of the vapors, passed out on the hood of the car and some kind gentleman saw her in such a state and helped. Innocently enough, in the midst of assisting her from the car, his foot became caught and he stumbled on top of her. . . and that is what you see in the picture. : ) very innocent.