Global warming alarmists promote several hysterical themes including "rising sea levels". The supposedly rising oceans are "evidence" of the catastrophic effect of humans on global temperatures. Problem is, like most anthropogenic global warming (AGW) marketing, it's an utter fabrication.

Check out this photograph: 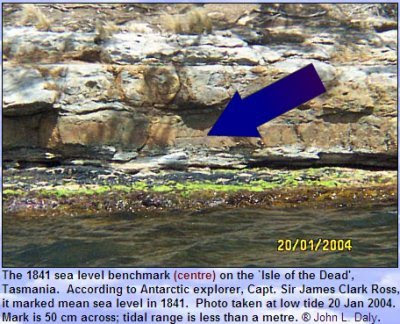 This photograph comes from Still waiting for Greenhouse, a site dedicated to the late researcher John Daley (1943-2003):

Originally from Britain, I came to live in Tasmania in 1980, settling near Launceston, and for the last 9 years have been one of the numerous `skeptics' speaking out publicly against the Global Warming scare, which makes exaggerated claims that the earth will warm by +1.5 to +6 deg. C. due to an enhanced Greenhouse Effect.

Climate and climate change has been a lifelong study of mine since my early days as a ship's officer in the British Merchant Navy. I have lived through and traced the progress of the `ice age' scare of the 1970's, the `nuclear winter' scare of the 1980s, and now the `global warming' scare of the present. All these scares have advanced the interests of what was a small academic discipline 30 years ago to become a mammoth global industry today. It is my view that this industry has, through the `politics of fear' which it has promoted, acted against the interests of the public.

Update: For those who asked, note the term "mean sea level".

"This was the moment when the rise of the oceans began to slow and our planet began to heal!"

The land at particular points can go up or down in elevation. So changes in sea level at a given location are essentially meaningless.

A classic (no pun intended) example is the "Temple of Serapis" at Pozzuoli at the north end of the Bay of Naples.

The dark marks in the columns are holes drilled by marine rock-boring mollusks and represent the highest water level around the columns as bradyseismic activity lowered and raised the columns over the centuries. 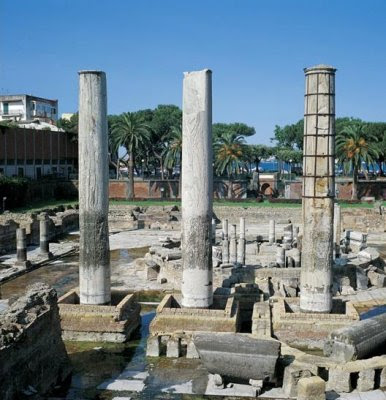