Just a reminder: Josh Meyer pulled back the curtain not just on Obama's sabotaging of Project Cassandra with his investigative report; he also helped clarify exactly what this Iranian regime really is: a gang of criminal thugs.

Not only has the Iranian regime been exporting terrorism by shipping weapons and manpower to various proxy wars around the region; it's also been funding and supporting itself through a very lucrative world wide trade in illegal narcotics such as cocaine.

Before Obama, this criminal regime was being held in check. Obama spent eight years implementing a radical policy in which an Iranian backed nuclear hegemony over the Middle East was a foregone conclusion; it could only be 'managed' or delayed, not stopped.

Obama's curious 'management' of the 'Iran problem' involved lifting most sanctions on Iran that had been placed there due to it's terrorist activities and then handing over billions of dollars to these criminals despite knowing what they'd do with the money.

If you watched Obama's implementation of his foreign policy from the start of his 1st term in 2009, you immediately noticed all of it was predicated on a massive reduction of American influence/leadership around the world.

In the Middle East, his shaping of his foreign policy began with what has now been coined his 'Apology Tour' as he went around to various Middle Eastern countries and basically apologized for past American actions and promised America would now stay home.

I and many others at the time pointed out immediately how dangerous and short sighted this was. The 'Pax Americana' that American influence around the world exerted kept a lot of rogue regimes in check.

Obama either did not grasp this or actively rejected it.

What Obama ended up doing with the deliberate withdrawal of American power and influence around the world was to create a massive power vacuum.

He seemed to have some benighted idea that the UN would step up and fill the vacuum he was creating and replace America's leadership.

After Obama spent the four years of his first term clearly signaling American withdrawal and appeasement, in his second term the bill started coming due as rogue regimes rushed in to fill the vacuum he'd created.

Having taken Obama's full measure, Putin launched his invasion of the Ukraine, something he NEVER would have done if he'd known there'd be any kind of real US response.

Having done a complete pull out of Iraq, Obama then scoffed at the rise of ISIS by calling it 'the JV team'.

Having toppled Ghadaffi in Libya, Obama/Hillary then small-footprinted the aftermath to the point 1 terrorist attack caused a complete and total US pullout.

Obama compounded his errors by then fixating his entire second term on making his nuclear deal with Iran.

To get that deal done, Obama and his team lied incessantly both to Congress and the American people.

He was so bent on securing a deal that he even left American hostages to rot in Iranian prisons.

Obama touted his nuclear deal as if it was actually going to help 'contain' Iran and make it a more 'moderate' regime and lessen it's import of terrorism around the Middle East and stop its spreading of proxy wars.

As time has passed, we've learned more and more about things Obama and team hid from the public and Congress. In fact, there's a strong evidence the Obama White House actually spied illegally on members of Congress and leaked classified info to the media to help pass the Deal.

Once the Iran Deal was secured, every single thing Obama had promised would happen turned out to be false.

Iran started another proxy war in Yemen. It escalated its involvement in Syria. It continued right on testing and launching ballistic missiles.

Over the past two years time and again more information/side deals that Team Obama hid from everyone about this Deal has surfaced.

As Iran kept defiantly launching ballistic missiles, Obama and Co. pontificated that these weren't really violations of the Deal.

Now thanks to a stunning investigative report from Josh Meyer at Politico, we now know about something else Obama and his team did to ensure the passage of the Iran Deal: the sabotaging of Project Cassandra to allow Hezbollah to move drugs and arms unchecked.

Literally all of Obama's foreign policy his 8 years in office in relation to Iran, Russia, Syria, Yemen, Iraq, Turkey, it's all predicated on how it affected his Iran Deal.

The brutal truth that the DNC Media won't tell you is this: Because Iran is a Russian-backed proxy state, Obama gave Russia and Iran free reign in the Ukraine, Syria, Yemen and Iraq.

Hundreds of thousands of people died because of this.

He can't enforce a red line in Syria because that would make Iran and Russia mad and kill the Iran deal.

He can't act in Yemen for the same reason.

Or in the Ukraine.

It's also why he can't allow moves against Hezbollah, to stop its drugs and arms trade.

Obama spent eight years virtually paralyzed because he was scared of doing anything whatsoever that might antagonized Putin or the Mullahs and thereby kill any chance at getting the Iran Deal done. 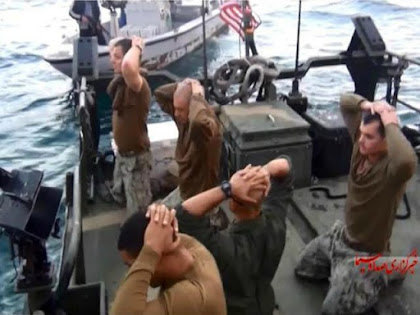 This included watching our Navy sailors being grabbed by the Iranians.

We got a big preview of Obama's paralysis in 2009 when the Green Revolution arose in Iran and Obama wouldn't even give the Iranian people crying out for freedom even tepid, token support.

Americans who'd watched Ronald Reagan throw his enthusiastic public and moral support behind Lech Walesa and Solidarity in Poland were treated to the spectacle of Obama insisting he wasn't about to 'meddle' with internal Iranian politics.

In the past year, our new President, Donald Trump, has had to consciously work to reverse and undo much of the damage Obama has caused around the world.

In addition to rejecting Obama's micromanagement of the US military, President Trump has put the world on notice we intend to take back our leadership role that Obama abdicated.

Trump has adopted a policy of providing support to our allies in the Middle East. Instead of leading the way and dictating to other countries, we remain in a support role while the locals do the heavy lifting.

In a new support role, the US has helped the Gulf Cooperation Council (GCC) lead the way in rolling back all the gains ISIS made in Iraq and Syria, culminating in the liberation of Mosul and Raqqa.

While Obama blubbered about decades that would be spent in a long war against ISIS, Trump unleashed James Mattis... and our allies rolled up the Islamic State and ended the threat of a terrorist state in less than nine months.

Unlike Obama, Trump has no compelling reason to stay out of Putin or the Mullah's way. Which is why we are sending arms to Ukraine to help them defend themselves against Russian aggression, and why the Iran Deal will soon be scrapped.

Now that another mass protest movement has sprang to life inside Iran, the world shall see a marked contrast between how Obama handled Iranians calling out for freedom and democracy vs how Trump will handle it.

All the usual suspects are now telling Trump to do what Obama did: bite his lip, stay silent and don't 'meddle' in Iranian affairs.

Well the usual suspects are going to be disappointed. Trump will go the route of Reagan when it comes to supporting people crying out for freedom from an oppressive, terrorist and criminal regime.

He will not go the Obama route.

Russia absolutely did not invade Ukraine.

Hahaha. I suppose the Ukrainians invaded Crimea and then in a fit of rage gave it to Russia? And the Donbass? Yeah, the Russians have "nothing to-do with it" despite active duty Russian troops turned contractor habe died there? Troll

If you had brain Moron you would realize that 98% of Crimeans are Russian. That's why they are not protesting. If you knew anything about history you would realize Crimea was always a part of Russia and was "given" to the Ukraine as a gift from the Ukrainian leader of the USSR Kruschchov--no big deal back then as it was just another part of the USSR--but guess what after the divorce the Russians got it back.Suck it up snow flake.

A couple of issues that need clarifying: Ukraine was a coup by the Obama/Hillary/state dept and supervised by Nuland who was caught on a hot mic bragging about it. They removed the elected president and replaced the Ukraine leadership with a nazi party. Yes you heard it right: the Nazi party!
They also tried to assassinate Putin as he flew back to Russia although they targeted the wrong plane since the colors were similar ergo the shutdown of MH370. Naturally Russia was accused when in actuality it was Obama/Hillary et al.

The uranium one deal also played into this Iran deal. Much of this sold uranium made its way to North Korea via Iran ergo the current danger of NK having nuclear capabilities.

The various planes loaded with untraceable cash destined for Iran in the billions of dollars also did not all land in Iran. Some flew to North Korea ergo the cash was delivered to NK. Would it interest you that Obama visited NK 17 times during his term? Reading 'Q' its apparent that NK is run by the rogue CIA and the young dictator is nothing but a puppet.

The war in Yemen started by the rogue CIA and Iran as you can learn by watching 'Dirty Wars' on Hulu and Netflix. It is as clear as day that Iran alone is not responsible but rather it was another coup to remove that leader. Obama personally gave the order to assassinate the American teenager - 16 years old - and his father via drone. That too is explained using fats in the documentary 'Dirty Wars'.

I suppose to go on but I recommend to watch 'Dirty Wars' that follows every lead and sicovering that Obama also had his own mercenary military force that carried out unspeakable crimes and reported only to him?!

In the near future Obama will be revealed to the American citizens to be a traitor and in-American agent placed to set the stage taking America down low enough as to be co-opted by the NWO and their One-World-Order.

He is and always was a very evil man without any allegiance to this country ergo every bad deed meant to hurt this republic but benefit those whom he serves: the rogue CIA force called 'The Farm'.

Obama funded the neo-nazi party and helped them secure positions of power in Ukraine. That is why Russian troops were welcomed by the people who were mostly of Russian ancestry.
http://www.businessinsider.com/john-mccain-meets-oleh-tyahnybok-in-ukraine-2013-12

He was so bent on securing a deal...- he was bent, period. Eight years of turning Pax Americana into Pox Americana. History will savage him, and rightly so.

Snowflake? Making such a braid brushed strike without even knowing me? Guess who's paternal grand parents came from Crimea? Mine. Who spoke Russian and Ukrainian, the former because the Soviet Union forced them too. Russia didn't "get it back" they took it. You're a troll. If that's all you have, you don't have much. As for history, I read a lot of it, including Russia's history. Your grasp of history is at best slippery. Ukraine has been part if Poland, Lithuania, the Ottoman and Austro-Hungarian empires. If you're going to attempt to go down that road, troll, you'll lose.as you already have.