THE "PAPADOPOULOUS" AFFAIR: Maggie Haberman and @NYTimes Bring Knives to a MOAB Fight

If you're not following Imperator_Rex on Twitter, you need to start. Now. His threads -- like this one exposing the failed and exposed DNC/NYT hack Maggie Haberman's latest collusion ploy -- are excellent. 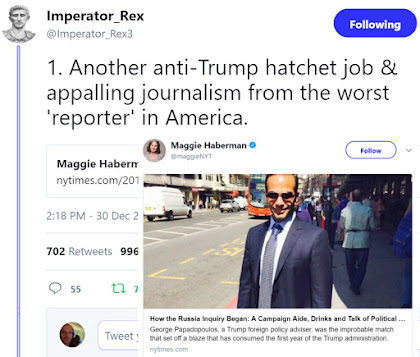 Read on (the following is Imperator_Rex's work):


2. Reminder: Maggie Haberman is NOT a journalist, but a propagandist - a total Clinton partisan & Obama cult member, with extreme TDS. EVERYTHING she writes should be immediately interpreted in that light.
3. Haberman was exposed by Wikileaks during the campaign as a KEY Clinton 'media surrogate', one of Hillary's 'earned media' - I call them Clinton media SLAVES. See: wikileaks.org/podesta-emails…

4. Haberman has a team of willing little Trump haters at the execrable NYT. One of her best buddies is Glenn Thrush, the perv they won't fire. Another is Matt Apuzzo, the author of this article. But you can be certain that Maggie was very much involved in this piece.
5. I'm pretty sure that we will be hearing a LOT more about Haberman in 2018 - and not in any way she likes, either. She knows it as well. This explains her desperation, 24/7, to bring down her POTUS, Donald J Trump.
6. We all know what's happening here. The narrative now is that George Papadopoulos, who served as a volunteer on Trump's campaign team for a few months, was the insitigator for Comey's FBI to open up their 'Trump-Russia' investigation in July 2016.
7. Apparently it was all based on tittle-tattle & gossip between Papadopoulos & an Australian diplomat over drinks in London in May. NOTHING AT ALL to do with the infamous Fusion GPS dossier.
8. Money Quote: 'It was not, as Mr. Trump and other politicians have alleged, a dossier compiled by a former British spy hired by a rival campaign. Instead, it was firsthand information from one of America’s closest intelligence allies.'
9. Amazing how these @NYT con-artists work isn't it? They're desperately trying to kill the Steele Dossier all of a sudden, because they've realized it's become toxic for Clinton, Obama & their cabals. The SAME dossier they assured us was rock solid evidence of muh Drumpf-Russia.
10. You can smell their desperation, because the article about Papadopoulos is also 100% correct. See, I've taken a special interest in George since his indictment, so it's interesting to note what the NYT article left out.
11. For example, that he had worked for Hillary Clinton's State Department in 2011, well before he came across the Trump campaign.

I’m sure Hillary and her campaign had no idea. 👌🏻 pic.twitter.com/ZpLPsWA6oU

12. That he also (curiously) worked in Ben Carson's campaign team very briefly (November 2015). Why is that curious?
13. It's curious that an ex-employee of Hillary's State Department would be ingratiating himself into GOP primary candidate campaigns, while the Clinton campaign ran a 'pied piper' strategy of weakening 'strong' GOP rivals to elevate Trump, who they perceived as 'weak' (lol).
14. Remember that? I do. Please feel free to read my observations on this failed strategy here:

15. Anyway, there's a THIRD piece of critical information that the NYT isn't telling you. I wasn't aware George hung out with Australian diplomats, but he sure enjoyed the company of Russian spies & Putin confidants, in particular Sergei Millian.
16. George & Sergei Millian (Russian spy & key Putin man in the USA) met in London just after George was bragging about his new role in the Trump campaign:

24. And here's an interesting fact. GP had another contact he never disclosed, : Sergei Millian. Seehttps://t.co/yiF5RKTnFy

17. Oh, that would be the same Sergei Millian who worked with Fusion GPS as a key source of the smear stories that formed the basis of yep, you guessed it, the Steele Dossier:

Why would our George be working with Sergei Millian? Just doesn't make sense does it?
19. Unless, of course, it makes total sense. This is what I think is obvious & what liberals just don't get:

George Papadopoulos was working for Fusion GPS & by extension, the Clinton Campaign.
20. Fusion GPS had a well-planned strategy to destroy Trump. One path was the Steele dossier. The other was to place people inside Trump's campaign team. Their mission: set up meetings between key Trump team members & Russians.
21. Once the meetings were set up, compromise Team Trump in the context of the unfolding 'Drump-Russia' lie that was sweeping the country.

Be in NO doubt: The Clintons were trying to create a false trail of contacts suggesting collusion b/w Trump & Russia.
22. This is 100% consistent with the tactics we have seen play out with @GenFlynn, AG Sessions, Trump, Kushner, as well as Trump Jnr. The objective is always the same - entrap them into meetings with Russians to support the Trump-Russia narrative.
23. You can read about George's efforts to entrap Team Trump in this link. He failed miserably, because I suspect Team Trump were onto the scam even then. Either way, when he was no longer useful, he was moved on:

15.GP emails Trump campaign, bragging he can broker a meeting b/w Putin & Trump. Note - no suggestion the Russians told him this.

24. Another thing I find odd about the NYT article is this brand new, sudden Australian connection. We are supposed to believe that George had drinks with Alexander Downer, who has been Australia's Secretary of State equivalent & is their High Commissioner in London.
25. As many of you know, I once lived in Australia and have many family connections there. They've contacted me saying they think the story is utterly BS. There is no specific date, no venue and no detail, for starters.
26. But the main thing they've told me is that it would be totally out of character for Downer to meet with a lickspittle nobody like George. Downer is a traditionalist and we'll known conservative. He would loathe flashy Flyboys like George. They'd never get access to him.
27. We will see, I guess, but given the outlet, authors & lack of detail, I'd put extremely low credibility on the story. As in 'zero'.
28. Liberals are in a frenzy about how George is co-operating with Mueller as part of his plea, fessing up about his integral role in being a contact point between Team Trump & Putin.
29. Because in their deluded & ignorant world, liberals truly believe that Trump would trust a kid he didn't know, with being a key team member in his evil conspiracy with Putin. Yeah, sure he would.
30. They don't like the REAL world. For example, the one where George is telling Mueller everything - his contacts & history with Team Clinton, his role in HRCs piper strategy, his contacts with Sergei Millian & other Putin agents, as well as who his handler was at Fusion GPS.
31. In other words, George's small - but important - role in a criminal conspiracy by Hillary Clinton & Barack Obama to destroy Donald Trump's presidential campaign & Presidency.
32. So unfortunately for the suckers at the @NYT, in their desperation to run as far away from the Steele Dossier as their fraudulent little legs can take them, they've run headlong straight back into it. Too funny.
33. I guess that's why POTUS Trump calls these losers the 'failing New York Times'. A key part of the #FakeNews brigade.

The #MAGA movement has exposed them as the corrupt propagandists they truly are. As has this thread.

Doug here: Annnd, I'm back! Anyhow, do you get the feeling that the Clinton campaign tried every avenue imaginable -- including actually colluding with Russians -- to position Trump as having colluded with Russians?