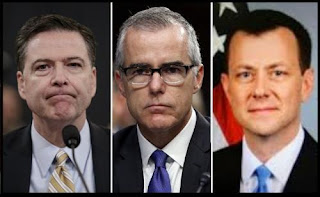 The letter reveals specific edits made by senior FBI agents when Deputy Director Andrew McCabe exchanged drafts of Comey's statement with senior FBI officials, including Peter Strzok, Strzok's direct supervisor, E.W. "Bill" Priestap, Jonathan Moffa, and an unnamed employee from the Office of General Counsel (identified by Newsweek as DOJ Deputy General Counsel Trisha Anderson) - in what was a coordinated conspiracy among top FBI brass to decriminalize Clinton's conduct by changing legal terms and phrases, omitting key information, and minimizing the role of the Intelligence Community in the email investigation.Doing so virtually guaranteed one thing:

That then-Democrat candidate Hillary Clinton would not be prosecuted for her criminal actions. 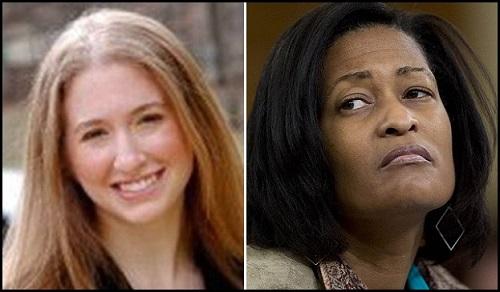 Also mentioned in the letter are the immunity agreements granted by the FBI in June 2016 to top Obama advisor Cheryl Mills and aide Heather Samuelson - who helped decide which Clinton emails were destroyed before turning over the remaining 30,000 records to the State Department. Of note, the FBI agreed to destroy evidence on devices owned by Mills and Samuelson which were turned over in the investigation.

According to documents produced by the FBI, FBI employees exchanged proposed edits to the draft statement. On May 6, Deputy Director McCabe forwarded the draft statement to other senior FBI employees, including Peter Strzok, E.W. Priestap, Jonathan Moffa, and an employee on the Office of General Counsel whose name has been redacted. While the precise dates of the edits and identities of the editors are not apparent from the documents, the edits appear to change the tone and substance of Director Comey's statement in at least three respects.

It was already known that Strzok - who was demoted to the FBI's HR department after anti-Trump text messages to his mistress were uncovered by an internal FBI watchdog - was responsible for downgrading the language regarding Clinton's conduct from the criminal charge of "gross negligence" to "extremely careless."

18 U.S. Code § 793 "Gathering, transmitting or losing defense information" specifically uses the phrase "gross negligence." Had Comey used the phrase, he would have essentially declared that Hillary had broken the law.

In addition to Strzok's "gross negligence" --> "extremely careless" edit, McCabe's damage control team removed a key justification for elevating Clinton's actions to the standard of "gross negligence" - that being the "sheer volume" of classified material on Clinton's server. In the original draft, the "sheer volume" of material "supports an inference that the participants were grossly negligent in their handling of that information."

Also removed from Comey's statement were all references to the Intelligence Community's involvement in investigating Clinton's private email server.

[W]e have done extensive work with the assistance of our colleagues elsewhere in the Intelligence Community to understand what indications there might be of compromise by hostile actors in connection with the private email operation.

The edited version removed the references to the intelligence community:

[W]e have done extensive work [removed] to understand what indications there might be of compromise by hostile actors in connection with the personal e-mail operation.

Furthermore, the FBI edited Comey's statement to downgrade the probability that Clinton's server was hacked by hostile actors, changing their language from "reasonably likely" to "possible" - an edit which eliminated yet another justification for the phrase "Gross negligence." To put it another way, "reasonably likely" means the probability of a hack due to Clinton's negligence is above 50 percent, whereas the hack simply being "possible" is any probability above zero.

It's also possible that the FBI, which was not allowed to inspect the DNC servers, was uncomfortable standing behind the conclusion of Russian hacking reached by cybersecurity firm CrowdStrike.

Given the combination of factors, we assess it is reasonably likely that hostile actors gained access to Secretary Clinton's private email account."

Given that combination of factors, we assess it is possible that hostile actors gained access to Secretary Clinton's personal e-mail account.

Johnson's letter also questions an "insurance policy" referenced in a text message sent by demoted FBI investigator Peter Strzok to his mistress, FBI attorney Lisa Page, which read "I want to believe the path you threw out to consideration in Andy's office -- that there's no way he gets elected -- but I'm afraid we can't take that risk." It's like an insurance policy in the unlikely event you die before you're 40...."

The letter from the Senate Committee concludes; "the edits to Director Comey's public statement, made months prior to the conclusion of the FBI's investigation of Secretary Clinton's conduct, had a significant impact on the FBI's public evaluation of the implications of her actions. This effort, seen in the light of the personal animus toward then-candidate Trump by senior FBI agents leading the Clinton investigation and their apparent desire to create an "insurance policy" against Mr. Trump's election, raise profound questions about the FBI's role and possible interference in the 2016y presidential election and the role of the same agents in Special Counsel Mueller's investigation of President Trump."

Johnson then asks the FBI to answer six questions:

We are increasingly faced with the fact that the FBI's top ranks have been filled with political ideologues who helped Hillary Clinton while pursuing the Russian influence narrative against Trump (perhaps as the "insurance" Strzok spoke of). Meanwhile, "hands off" recused Attorney General Jeff Sessions and assistant Attorney General Rod Rosenstein don't seem very excited to explore the issues with a second Special Counsel. As such, we are now almost entirely reliant on the various Committees of congress to pursue justice in this matter. Perhaps when their investigations have concluded, President Trump will feel he has the political and legal ammunition to truly clean house at the nation's swampiest agencies.

Online Straw Poll - Do you approve of the job President Trump is doing?