LEVIN OBLITERATES THE MUELLER FIASCO: We Now Have Proof This is a "Mickey Mouse investigation" 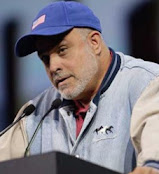 The media are shrieking that this will prove that the Trump campaign colluded with the Russian government to unjustifiably win the 2016 presidential election. But, as Levin points out, there is still no evidence.

“[Special counsel Robert] Mueller’s investigation is a Mickey Mouse investigation, and he proved it yet again today,” Levin said: