MOLE HUNT: What’s really happening inside the DOJ and FBI

Strzok is just going to be the beginning.

In fact, he's been put in a holding cell where he's kept busy & distracted while he's thoroughly investigated & evidence collected of his political fixing.

For the past 11 months, even before DOJ IG started his investigation, Trump & Co. likely knew who the political fixers in the DOJ/FBI were:

These political fixers needed to be

2) given a cover story so they wouldn't realize they themselves are now being investigated.

Strzok was likely thunderstruck to realize the DOJ IG has been digging through his emails/texts/records of the past few years, investigating him quite throughly as Strzok was busy trying to find Trump/Russian collusion. 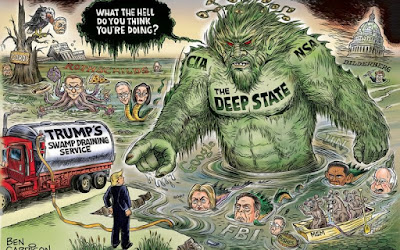 What people need to realize is that Trump & his team had been informed/knew all about the Obama admin's use of intel sources to spy on them.

They came into office already knowing about it.

When you know how your enemy is moving against you, what methods he is using, you can lay traps for him.

Mueller's job was to run a unit staffed with suspected leakers/political fixers who needed to be isolated, kept out of trouble while they were all thoroughly investigated.

Comey's job was create the cover story needed to lead to the formation of Mueller's isolated unit.

Mueller's team is kept busy looking for the holy grail that doesn't exist, managing to dredge up some process violations as they are kept busy.

Meanwhile the DOJ IG Horowitz is in the deep background, doing his own investigation.

Not only are the activities of the past few years of these suspected leakers/political fixers being exhaustively researched; so is the activity they are engaged in now.

Having engaged in blatant political fixing in years past to cover up crimes of Democrats to make sure they skate, and then having switched to trying to manufacture cases against the incoming Trump administration as soon as it won the election....

...would it shock anybody to learn that this team assembled to investigate Trump/Russian collusion decided to violate procedures & break the law in it's attempts to nail Trump?

If this theory is correct, it's brilliant. Blatant political fixers were conned into isolating themselves on a fake investigative team while THEY THEMSELVES were the real targets of an investigation.

The counter intel people get played by masters.

Strzok, right up until the moment he's exposed, thinks he's in the process of bringing Trump down.

Too late he realizes "HOLY SHIT....*I'M* THE ONE BEING INVESTIGATED....we're ALL being investigated...the IG has been behind us all this time, watching us!"

And if this theory is correct, it's too late for them to do anything about it.

The evidence has already been collected, processed, cataloged.

Stealth Jeff got them all.

Bacoontime, I agree with you. They are a cabal. All of them.

I would love to believe this because I do think Trump is smarter than all of them, BUT. I can't get behind the Comey part. I think he's dirty as can be. I do wonder why Sessions has appeared to do nothing,