In an interview with a local D.C. TV station, Deputy Attorney General Rod Rosenstein admired the monster he created, who now runs an alleged investigation into supposed Russia-Trump collusion but which quickly morphed into what amounts to a silent coup against a sitting President of the United States:

Rosenstein has much to be accountable for. Yes, Virginia, this is a witch hunt. Robert Mueller III was appointed special counsel after his friend, the vindictive former FBI Director James Comey, committed a federal crime by leaking a memo which was a government record to the press. Mueller has picked staff and prosecutors as if he were stocking Hillary Clinton’s Department of Justice. He has picked a bevy of Clinton donors, an attorney who worked for the Clinton Foundation, a former Watergate assistant prosecutor, and even a senior advisor to Eric Holder. Objective professionals all.

Thanks to Rosenstein, Mueller is in fact colluding with Comey and Clinton moles to enact revenge on President Trump for Comey’s firing, something which even Comey said Trump was constitutionally entitled to do. There is no evidence of collusion with Russia or obstruction of justice. It is not obstruction of justice for a President to exercise his legal and constitutional authority.

The facts and the lack of an actual crime will not stop Robert Mueller. Just show him the man, or woman, and he will show you the crime. As Professor Alan Dershowitz writes in the Washington Examiner: 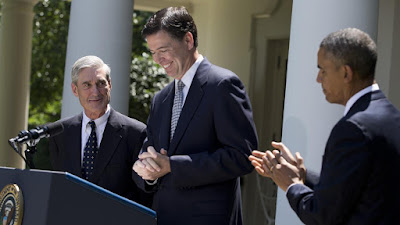 Special counsel Robert Mueller was commissioned to investigate not only crime but the entire Russian "matter." That is an ominous development that endangers the civil liberties of all Americans.

Federal prosecutors generally begin by identifying specific crimes that may have been committed -- in this case, violation of federal statutes. But no one has yet identified the specific statute or statutes that constrain Mueller's investigation of the Russian matter. It is not a violation of any federal law for a campaign to have collaborated with a foreign government to help elect their candidate….

One does not have to go back to the Soviet Union and Lavrentiy Beria's infamous boast to Stalin, "Show me the man and I will show you the crime," in order to be concerned about the expansion of elastic criminal statutes. There are enough examples of abuse in our own history.

Indeed, now we here reports that Mueller’s investigation will range anywhere from Jared Kutchner’s finances to perhaps any unpaid parking tickets Sean Spicer may have.

Rosenstein is apparently satisfied with what amount to moles from Team Clinton being involved in both the sham collusion investigation and the Comey coverup of Hillary Clinton’s crimes with the head mole being one Peter Strzok. As Byron York reports in the Washington Examiner:

House Intelligence Committee chairman Devin Nunes has issued an angry demand to the FBI and Department of Justice to explain why they kept the committee in the dark over the reason Special Counsel Robert Mueller kicked a key supervising FBI agent off the Trump-Russia investigation.

Stories in both the Washington Post and New York Times on Saturday reported that Peter Strzok, who played a key role in the original FBI investigation into the Trump-Russia matter, and then a key role in Mueller's investigation, and who earlier had played an equally critical role in the FBI's Hillary Clinton email investigation, was reassigned out of the Mueller office because of anti-Trump texts he exchanged with a top FBI lawyer, Lisa Page, with whom Strzok was having an extramarital affair. Strzok was transferred to the FBI's human resources office -- an obvious demotion -- in July.

Strzok was everywhere, throwing sand into the wheels of justice at every opportunity to protect Hillary Clinton and her operatives:

Strzok was one of the leaders of the FBI’s investigation into Hillary Clinton’s use of a private email server, and he participated in interviews with a number of Clinton’s top aides, including Huma Abedin and Cheryl Mills, as well as Clinton’s own interview with the FBI.

More from the report: “Neither of the Clinton associates, Cheryl Mills and Huma Abedin, faced legal consequences for their misleading statements, which they made in interviews last year with former FBI section chief Peter Strzok.”

Top Mueller deputy Andrew Weismann was caught wearing his antipathy towards Donald Trump on his sleeve when he penned a love note to then Acting Attorney General Sally Yates when she refused to carry out a lawful order from President Trump to enforce his travel ban:

A top prosecutor working with special counsel Robert Mueller praised former Acting Attorney General Sally Yates at a moment in late January when she was at loggerheads with newly minted president Donald Trump.

Andrew Weissman emailed Yates ten days into the Trump administration after she refused to enforce or defend an executive order banning incoming travelers to the U.S. from seven terror-prone majority Muslim countries.

'I am so proud. And in awe. Thank you so much. All my deepest respects,' Weissman wrote to her.

Sally Yates was part of the so-called “resistance” to President Trump and his agenda. So too is Peter Strzok. Andrew Weisman, Robert Mueller… and Rod Rosenstein, who is proud of all this.

Now we have word that a top DOJ official, one Bruce G. Orr, who was demoted for activities related to the infamous dossier which may have been used by the FBI to fraudulently obtain FISA warrants to spy on Team Trump and American citizens:

A senior Justice Department official was demoted this week amid an ongoing investigation into his contacts with the opposition research firm responsible for the anti-Trump “dossier,” the department confirmed to Fox News.

Until Wednesday morning, Bruce G. Ohr held two titles at DOJ: associate deputy attorney general, a post that placed him four doors down from his boss, Deputy Attorney General Rod Rosenstein; and director of the Organized Crime Drug Enforcement Task Forces (OCDETF), a program described by the department as “the centerpiece of the attorney general’s drug strategy.”…

Initially senior department officials could not provide the reason for Ohr’s demotion, but Fox News has learned that evidence collected by the House Permanent Select Committee on Intelligence (HPSCI), chaired by Rep. Devin Nunes, R-Calif., indicates that Ohr met during the 2016 campaign with Christopher Steele, the former British spy who authored the “dossier.”…

Additionally, House investigators have determined that Ohr met shortly after the election with Glenn Simpson, the founder of Fusion GPS -- the opposition research firm that hired Steele to compile the dossier with funds supplied by the Hillary Clinton campaign and the Democratic National Committee. By that point, according to published reports, the dossier had been in the hands of the FBI, which exists under the aegis of DOJ, for some five months, and the surveillance on Carter Page, an adviser to the Trump campaign, had started more than two months prior.

Oh, what tangled webs Rosenstein and the FBI have woven! Republican lawmakers, needless to say, are not amused at all this, casting the obvious doubts on Rosenstein’s praise of Special Counsel Mueller:

Several conservative lawmakers held a news conference Wednesday demanding more details of how the FBI proceeded last year in its probes of Hillary Clinton’s use of personal email and Russian election interference. This week, the conservative group Judicial Watch released an internal Justice Department email that, the group said, showed political bias against Trump by one of Mueller’s senior prosecutors…

“The question really is, if Mueller was doing such a great job on investigating the Russian collusion, why could he have not found the conflict of interest within their own agency?’’ Rep. Mark Meadows (R-N.C.) asked at the news conference. Meadows, leader of the Freedom Caucus, cited a litany of other issues that he said show bias on the part of the FBI and Mueller, including past political donations by lawyers on Mueller’s team.

A good question Rosenstein won’t answer. Rosenstein is satisfied with Mueller, and why shouldn’t he be?  The two go back a long way and cooperated in the cover up of an FBI investigation into Russia’s use of bribes, kickbacks, and money laundering to grab U.S. uranium supplies and real collusion with Hillary Clinton, only to resurface years later to chase phantom collusion between Team Trump and Russia.

Mueller and Rosenstein were both involved in the FBI investigation dating back to 2009, with current Deputy Attorney General Rod Rosenstein and Special Prosecutor Robert Mueller up to their eyeballs in covering up evidence of Hillary’s collusion, bordering on treason, with Vladimir Putin’s Russia:

Prior to the Obama administration approving the very controversial deal in 2010 giving Russia 20% of America’s Uranium, the FBI had evidence that Russian nuclear industry officials were involved in bribery, kickbacks, extortion and money laundering in order to benefit Vladimir Putin, says a report by The Hill…

John Solomon and Alison Spann of The Hill: Federal agents used a confidential U.S. witness working inside the Russian nuclear industry to gather extensive financial records, make secret recordings and intercept emails as early as 2009 that showed Moscow had compromised an American uranium trucking firm with bribes and kickbacks in violation of the Foreign Corrupt Practices Act, FBI and court documents show…

From today’s report we find out that the investigation was supervised by then-U.S. Attorney Rod Rosenstein, who is now President Trump’s Deputy Attorney General, and then-Assistant FBI Director Andrew McCabe, who is now the deputy FBI director under Trump.

Robert Mueller was head of the FBI from Sept 2001-Sept 2013 until James Comey took over as FBI Director in 2013. They were BOTH involved in this Russian scam being that this case started in 2009 and ended in 2015.

If evidence of bribery, kickbacks, extortion, and money laundering in the Uranium One affair are not grounds for a special prosecutor assigned to investigate Hillary Clinton, what is? Rosenstein and Mueller, by their silence on this investigation hidden from Congress and the American people, and using the office of special counsel and a politicized FBI to conduct a silent coup against a duly elected president are unindicted coconspirators in Hillary’s crimes and should be terminated immediately.

As to Strzok, here's the question - who sent him? Who gave him assignments on Clinton's emails and on Mueller's Trump investigation?

He's a foot soldier, he has a boss, someone who manages him as a resource of the FBI and Justice Department. His boss had expectations of him. He was an "agent" of a government organization headed by specific higher level management.

What I'm NOT hearing enough of is the name of Andrew McCabe.

But this is not one rogue agent - it is a cabal on government bureaucrats doing the bidding of a specific political party.

The Swamp needs to be drained and quickly.

It boggles my mind that Mueller and Rosenstein haven't been fired and placed under investigation and their lackys as well. I don't get it.