One month ago, a chart from Convoy Investments went viral for showing that among all of the world's most famous asset bubbles, bitcoin was only lagging the infamous 17th century "Tulip Mania."

One month later, the price of bitcoin has exploded even higher, and so it is time to refresh where in the global bubble race bitcoin now stands, and also whether it has finally surpassed "Tulips."

Conveniently, overnight the former Bridgewater analysts Howard Wang and Robert Wu who make up Convoy, released the answer in the form of an updated version of their asset bubble chart. In the new commentary, Wang writes that the Bitcoin prices have again more than doubled since the last update, and "its price has now gone up over 17 times this year, 64 times over the last three years and superseded that of the Dutch Tulip’s climb over the same time frame."

That's right: as of this moment it is official that bitcoin is now the biggest bubble in history, having surpassed the Tulip Mania of 1634-1637: 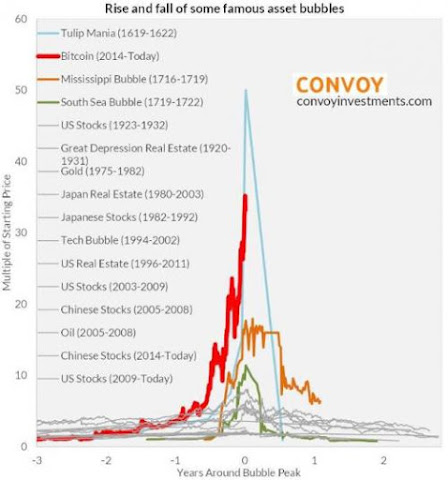 And with that we can say that crypto pioneer Mike Novogratz was right once again when he said that "This is going to be the biggest bubble of our lifetimes." Which, of course, does not stop him from investing hundreds of millions in the space: when conceding that cryptos are the biggest bubble ever, "Novo" also said he expects bitcoin to hit $40,000 and ethereum to triple to $1,500.

As for Wang, here are some additional observations:

I continue this topic and discuss a main driver of bubbles. When we see a dramatic rise in asset prices, there is often an internal struggle between the two types of investors within us. The first is the value investor, “is this investment getting too expensive?” The second is the momentum investor, “am I missing out on a trend?” I believe the balance of these two approaches, both within ourselves and across a market, ultimately determines the propensity for bubble-like behavior. When there is a new or rapidly evolving market, our conviction in the value investor can weaken and the momentum investor can take over. Other markets that structurally lack a basis for valuation are even more susceptible to momentum swings because the main indicator of future value is the market’s perception of recent value.

We will publish the balance of Wang's full note "What causes asset bubbles?" shortly, but for now we just wanted to experience a moment of true zen serenity, knowing that we now stand in proximity to an asset bubble the magnitude of which has never before been observed by humanity. Thanks central banks!