The Indictment of James Comey

Now we know: not only did Hillary Clinton show intent in her mishandling of classified materials routed through her private server, but former FBI Director James Comey and his team showed intent in letting her get away with it. These acts have grave implications for not only American national security, but to the rule of law itself.

Sen. Ron Johnson, R-Wis., chairman of the Homeland Security Committee, in a Thursday letter to current FBI Director Christopher Wray, reveals how edits to Comey’s exoneration memo went beyond changing “grossly negligent” to “extremely careless” but edited out content that shows the FBI knew Hillary was intentionally in violation of the Espionage Act but that, since the decision to exonerate her had already been made, they had to submit to the annals of history a lie they agreed upon:

Newly released documents obtained by Fox News reveal that then-FBI Director James Comey’s draft statement on the Hillary Clinton email probe was edited numerous times before his public announcement, in ways that seemed to water down the bureau’s findings considerably.

Sen. Ron Johnson, R-Wis., chairman of the Senate Homeland Security Committee, sent a letter to the FBI on Thursday that shows the multiple edits to Comey’s highly scrutinized statement.

In an early draft, Comey said it was “reasonably likely” that “hostile actors” gained access to then-Secretary of State Hillary Clinton’s private email account. That was changed later to say the scenario was merely “possible.” 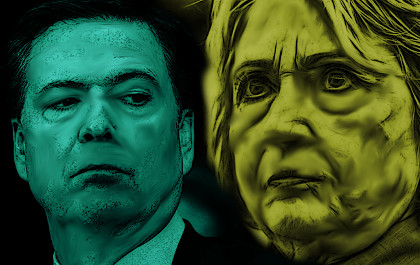 Another edit showed language was changed to describe the actions of Clinton and her colleagues as “extremely careless” as opposed to “grossly negligent.” This is a key legal distinction.

Johnson, writing about his concerns in a letter Thursday to FBI Director Christopher Wray, said the original “could be read as a finding of criminality in Secretary Clinton’s handling of classified material.”

“This effort, seen in light of the personal animus toward then-candidate Trump by senior FBI agents leading the Clinton investigation and their apparent desire to create an ‘insurance policy’ against Mr. Trump’s election, raise profound questions about the FBI’s role and possible interference in the 2016 presidential election and the role of the same agents in Special Counsel Mueller’s investigation by President Trump,” Johnson said.

Indeed, this does raise profound questions. Coupled with the text messages of lead investigator, FBI Agent Peter Strzok, who has become known as the Zelig of the FBI who mysteriously appeared at every controversial moment, expressing clear intent to prevent the election of Donald Trump, we have before us a criminal conspiracy in which the most powerful law enforcement agency on this planet conspired with one political party to defeat the candidate of the other:

The letter reveals specific edits made by senior FBI agents when Deputy Director Andrew McCabe exchanged drafts of Comey's statement with senior FBI officials, including Peter Strzok, Strzok's direct supervisor, E.W. "Bill" Priestap, Jonathan Moffa, and an unnamed employee from the Office of General Counsel (identified by Newsweek as DOJ Deputy General Counsel Trisha Anderson) - in what was a coordinated conspiracy among top FBI brass to decriminalize Clinton's conduct by changing legal terms and phrases, omitting key information, and minimizing the role of the Intelligence Community in the email investigation. Doing so virtually assured that then-candidate Hillary Clinton would not be prosecuted.

Imagine what was at stake here. If the FBI had just followed the evidence where it led and drew the obvious conclusions, Hillary Clinton would have been indicted, the Democratic Party would have been irreparably shattered, with Donald Trump wining in a popular vote as well as electoral vote landslide. This, in the view of a corrupted and politicized FBI had to be prevented at all costs and the Comey memo had to be sanitized before its release:

In addition to Strzok's "gross negligence" --> "extremely careless" edit, McCabe's damage control team removed a key justification for elevating Clinton's actions to the standard of "gross negligence" -- that being the "sheer volume" of classified material on Clinton's server. In the original draft, the "sheer volume" of material "supports an inference that the participants were grossly negligent in their handling of that information." …

Furthermore, the FBI edited Comey's statement to downgrade the probability that Clinton's server was hacked by hostile actors, changing their language from "reasonably likely" to "possible" -- an edit which eliminated yet another justification for the phrase "Gross negligence." To put it another way, "reasonably likely" means the probability of a hack due to Clinton's negligence is above 50 percent, whereas the hack simply being "possible" is any probability above zero.

Strzok provided the motive for these activities to cover up the guilt of Hillary Clinton, activities which constitute obstruction of justice in text messages between him and his mistress and fellow FBI Agent Lisa Page: While everybody was predicting a Hillary victory, Strzok had his doubts and elevated himself to the status of savior of America, requiring that Trump be stopped at all costs, with this end justifying any and all means:

In another text, Page said: "maybe you’re meant to stay where you are because you’re meant to protect the country from that menace." Strzok replied: "I can protect our country at many levels, not sure if that helps."

What they tried to do about it is called obstructing justice and using the powers of their offices to interfere in a presidential election to materially aid the candidate of their choice. As Rep. Jordan notes, we face the probable reality of a dossier concocted by Russians, paid for by Team Hillary and the DNC, being used to fraudulently trick the FISA court to order surveillance of one campaign to the benefit of the other campaign. The politically motivated unmasking of Michael Flynn dovetails with this criminal conspiracy and explains much about the true purpose of Special Counsel Robert Mueller’s probe, which ignores Hillary’s collusion with Russia in Uranium One but indicts a Trump adviser for misremembering a legal phone call.. Can anyone say collusion? Then we face the prospect of a weaponized FBI becoming a campaign arm of the Hillary campaign.

We see now the method in the madness of the tarmac meeting between Bill Clinton and AG Loretta Lynch, why the FBI issued immunity agreements to Clinton cronies such as Cheryl Mills, never empanelled a grand jury, started drafting an exoneration agreement before witnesses were interviewed, and failed to put Hillary under oath in an interview that James Comey did not attend. The fix was in

One can only hope that Attorney General Jeff Sessions is not asleep at the switch but rather just keeping a low profile as he methodically puts together a damning case of criminal conspiracy, obstruction of justice and, yes, gross negligence prior to an avalanche of indictments starting with Hillary Clinton and working its way down the food chain to include James Comey, Peter Strzok, Andrew McCabe and many others.

Laws don’t apply to Democrat Communists, we don’t have a functioning DOJ, Hillary and her comrades are safe.

Its astonishing, in an age of constant astonishment. Second only to Trumps indomitability, this is indeed the biggest story in the FBI's history.