When I was a kid, the term Federal Bureau of Investigation represented the pinnacle of the American justice system: incorruptible, utterly fair, and ethically... above reproach.

My, how times have changed.

Under the Obama administration, the FBI (and former director Robert Mueller's investigation) appears to have been hopelessly politicized at its uppermost levels. Consider:

A lead FBI investigator -- Peter Strzok -- has been removed from Robert Mueller's special counsel team for texting his mistress a series of various anti-Trump tweets (I'm old enough to remember when having a mistress disqualified you from a TOP SECRET clearance, but -- hey -- I'm an old man). Furthermore, the upper echelons of the FBI have refused requests from Congress to release said texts.

As for Hillary Clinton's illegal email server, the same investigator -- the mercurial mega-scapegoat super-agent is said to have rewritten language to exonerate Clinton rather than criminally charging her. 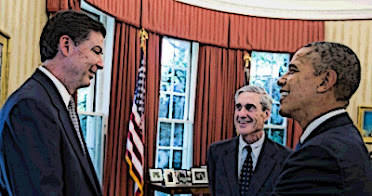 As for the Mueller "special" impeachment counsel, at least three of the key investigators donated a total of more than $50,000 to Hillary Clinton and other Democrats.

Gee. No conflict there, I guess.

And they say comedy is dead.

Another Mueller "investigator" -- one Jeannie Rhea, if that is her real name -- "was the personal attorney of Ben Rhodes and also represented the Clinton Foundation".

Gee, I'm sure she'll be unbiased.

Fortunately, help may be in the way in the form of an Inspector General. One can dream, can't one?

As Gregg Jarrett noted, "...[It] is astonishing is that one man with a political agenda exonerated Hillary Clinton and then simultaneously launched the investigation against President Trump."

Astonishing, but not unexpected given the unparalleled corruption and criminality of the most scandalous president in American history* -- one Barack Hussein Soetero Dunham Obama (which is the legal name he prefers, I hear).