It was a year ago and Comey was explaining why Hillary’s close aide, Cheryl Mills, not only received an immunity agreement in exchange for turning over her laptop, but a pass on lying to the FBI.

The FBI Director claimed that Mills had to receive immunity because the laptop might be protected by attorney-client privilege. Mills, like Hillary Clinton, had worked as a lawyer. But they were both government officials working for the State Department. Hillary wasn’t Mills’ client. The government was.

Comey and his people knew the law. They chose to ignore it to protect a key Hillary aide from rolling over.

Mills was the woman Hillary would send in to clean up her dirty laundry. Mills had taken point on the email server cover-up. If anyone knew where the bodies were buried, she did. Instead not only did she get an immunity agreement, but the FBI also agreed to destroy the computers after the search. 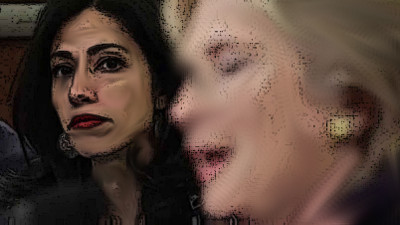 Mills had told the FBI that she didn’t know about Hillary’s email server. But the FBI had notes and emails proving that Mills was lying. And when Comey was asked about it, he came out with, “There's always conflicting recollections of facts.”

That is what the lawyer of the woman who had been caught lying to the FBI might have been expected to argue. But there were no charges, instead the FBI Director was presenting her defense.

Or one of her associates.

Hillary Clinton had told the FBI that she had no idea that the “C” stood for confidential. Instead of laughing in her face or arresting her, the FBI boss testified personally to her truthfulness.

Hillary Clinton, Mills and Huma Abedin made what appear to be false statements to the FBI.

Had Mills been working for Trump, the same number would have been run on Mills as on Flynn and Papadopoulos. But the men interviewing Mills didn’t want her to sing. They wanted her to keep quiet.

Mills and Abedin were interviewed by the FBI's Peter Strzok and the DOJ's David Laufman. Strzok was exchanging pro-Hillary and anti-Trump messages in an extramarital affair with a woman working for FBI deputy director Andrew McCabe. McCabe’s wife had received a sizable amount of money from a Clinton ally. Laufman, whose counterintelligence section was heading the investigation, is an Obama donor.

Strzok received input on the Comey letter exonerating Clinton. The Mills interview killed two birds with one stone. A key Hillary aide got immunity and the evidence would be destroyed.

This wasn’t an interview. It was a cover-up.

It’s why Comey sounded like Mills’ lawyer. And why so many Clinton associates got immunity agreements. Why the FBI agreed to destroy evidence. Why there were no recordings of Hillary’s testimony. And why lying to the FBI wasn’t a crime when it came to Hillary and her aides.

But the double standard kicked in when the Clinton cover-up crew went after Trump.

The double standard isn’t surprising when you look at who was doing the interviewing.

Strzok and Laufman had also interviewed Hillary. No recordings were made of the session. But Comey testified that it’s a “crime to lie to us”.

Not for the Clintons and their associates.

Hillary had told her interviewers that she hadn’t received training on handling classified information, but she signed a document testifying that she had. Hillary claimed that she hadn’t carried a second phone, but an aide, Justin Cooper, who made the server possible, testified that indeed she did.

These are the kinds of misstep that Team Mueller would have used to hang a Trump associate. But Comey testified that Hillary Clinton did not lie.

And that meant he was lying.

Not only did Clinton’s people lie to the FBI. But the head of the FBI had lied for them.

The fix had been in all along.

Comey had drafted his letter exonerating Clinton before the interviews even took place. Strzok had been copied on the next email. His contribution had included changing the description of Clinton's actions from "grossly negligent" to "extremely careless."  Strzok is now in the spotlight because Team Mueller’s stonewalling of the reasons for his removal have been exposed.

Strzok, a Hillary partisan, had given his favorite politician a pass and signed the document opening the Russia investigation. The Steele dossier, provided by a Russian intelligence operative and paid for by the Clinton campaign, was funneled through to Strzok’s team. And Strzok had interviewed Flynn.

Team Mueller resisted discussing Strzok. Alongside the constant leaks to favored media outlets like the Washington Post, Mueller’s people have worked to maintain a monopoly on information.

Judge Beryl Howell, an Obama appointee, a friend of Loretta Lynch, Obama's DOJ boss, and of Andrew Weissmann, Mueller’s deputy, decided to seal the Papadopolous case. Howell also decided that Manafort isn’t entitled to attorney-client privilege. These actions took place at the behest of Weissmann. The latter had sent an email praising Sally Yates, the disgraced former acting Attorney General, for refusing to stand by the law on the Trump travel ban.

Weissmann, like the rest of Team Mueller, wasn’t there to get at the truth, but to stop President Trump. The Mueller deputy is one of two Obama donors on the team. There are also five Clinton donors. One of whom had represented the Clinton Foundation. Another had represented Justin Cooper, the Clinton adviser, who helped run Hillary's email server and claimed to have destroyed some of Hillary’s devices.

It’s hard to imagine how this investigation could have been any more partisan or tainted.

The Clintons and their allies have obstructed justice. And it’s time for a real investigation.