SENATE JUDICIARY CHAIR: McCabe Don’t Need to Go Home, But He Needs to Get the Hell Out o’ the FBI

The prolific Chuck ("No Relation") Ross reports that, at long last, the well-deserved ouster of conflicted FBI chieftan Andrew McCabe may be nigh. 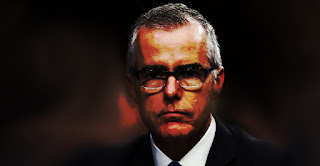 Senate Judiciary Committee chairman Chuck Grassley is calling on Andrew McCabe to be replaced as the FBI’s deputy director... “He oughta be replaced,” Grassley said of McCabe. “And I’ve said that before and I’ve said it to people who can do it...”

...The bureau’s second highest-ranking official, McCabe will be interviewed by the House Intelligence Committee on Tuesday. He will be asked about his role in the Russia investigation and his knowledge about the infamous Trump dossier, the 35-page document written by former British spy Christopher Steele and funded by the Clinton campaign and DNC...

...Grassley has pressed the FBI over McCabe’s involvement in the Clinton email investigation. McCabe recused himself from that investigation in Oct. 2016 [, but only] after it was reported that his wife received hundreds of thousands in campaign contributions for a Virginia state senate bid from Virginia Gov. Terry McAuliffe, a staunch ally of the Clintons.

McCabe appears to have been privy to a potentially treasonous attempt to stop Donald Trump from ascending to the presidency. Text messages between FBI counter-terror expert Peter Strzok and his mistress Lisa Page allude to an "insurance policy" against a Trump presidency.

...one cryptic text message, dated Aug. 15, 2016, Strzok appeared to reference a discussion that had taken place in McCabe’s office...

“I want to believe the path you threw out for consideration in Andy’s office — that there’s no way he gets elected — but I’m afraid we can’t take that risk. It’s like an insurance policy in the unlikely event you die before you’re 40,” Strzok wrote to Lisa Page, an FBI lawyer who was also his mistress.

The term "Drain the Swamp" was purpose-built for hacks like McCabe, Strzok, Bruce Ohr and their ilk. Should it prove true that they conspired to create the bogus Russian "Dossier" in order to first damage the Trump campaign and then to try to impeach him, they need to be prosecuted to the maximum extent possible.

Democrats and Republicans alike should seek to strongly deter administrations of either party from using the instruments of government (including the IRS) from attacking their political opponent.

Examples need to be made.

Related: A TIMELINE OF TREASON: How the DNC and FBI Leadership Tried to Fix a Presidential Election.