The hard left progressives who run old media outlets like the AP and WaPo are running scared. Bit by bit, the corpus of the greatest scandal in American history is being exhumed and brought into full view.

As a central figure in the affair, FBI deputy director Andrew McCabe has yet to testify in a public venue about his various conflicts of interest and his untoward actions to protect Hillary Clinton and attack Donald Trump.

The media is currently using two themes to protect McCabe, one more ludicrous than the other, as we shall see.

Theme 1: By naming names, Trump is tarring the whole FBI and DOJ

The kooks at the Washington Amazon Post -- and their readers -- are pushing this particular theme. In short, that naming a few sleazy actors -- and their actions -- in the DOJ and the FBI under the Obama administration somehow is an attack on both institutions.

Well, by that logic, these nutjobs should oppose civil rights investigations of police forces, police corruption cases, and the like. After all, by investigating a few dirty cops, you're attacking the entire police force!

I call this the Animal House defense:

Ladies and gentlemen, I'll be brief. The issue here is not whether we broke a few rules, or took a few liberties with our female party guests—we did. [winks at Dean Wormer]. But you can't hold a whole fraternity responsible for the behavior of a few, sick perverted individuals. 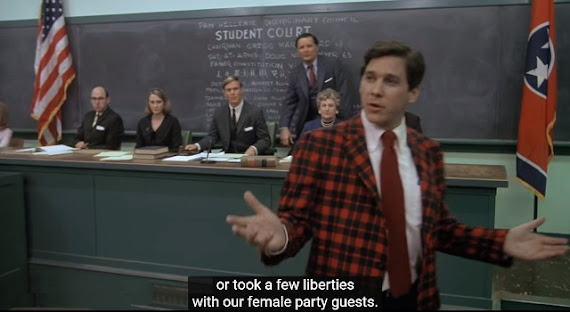 For if you do, then shouldn't we blame the whole fraternity system? And if the whole fraternity system is guilty, then isn't this an indictment of our educational institutions in general? I put it to you, Greg: isn't this an indictment of our entire American society? Well, you can do what you you want to us, but we're not going to sit here and listen to you badmouth the United States of America. Gentlemen! [Leads the Deltas out of the hearing, all humming the Star-Spangled Banner]

You can easily imagine the WaAmazonBezosPo and its twisted readers repeating this speech, and simply substituting the FBI and DOJ for the fraternity and educational systems, respectively.

Theme 2: McCabe is Innocent! Unfairly Tarnished! As Pure as the Driven Snow!

In an unbylined (surprise) editorial disguised as a news article, the Associated #FakeNews Press goes all-in on this theme ("Trump tweets falsehoods about wife of retiring FBI Deputy Director McCabe").

But Trump's tweet was incorrect. McCabe's wife, Jill, did not get $700,000 in donations from Clinton for a Virginia state Senate race in 2015.

How can FBI Deputy Director Andrew McCabe, the man in charge, along with leakin’ James Comey, of the Phony Hillary Clinton investigation (including her 33,000 illegally deleted emails) be given $700,000 for wife’s campaign by Clinton Puppets during investigation?

Trump didn't tweet about Clinton giving Jill McCabe the money; he said "Clinton puppets", which is exactly what happened.

The money came from Virginia Gov. Terry McAuliffe's political action committee and the Virginia Democratic Party and was donated before McCabe was promoted to deputy director and assumed a supervisory role in the Clinton email investigation.

The timing described by the AP, too, is a flat-out falsehood. Prior to his promotion, McCabe served as assistant director in charge of the FBI's Washington office, which contributed -- by his own admission -- personnel to the Clinton investigation. It is likely that McCabe, directly or indirectly, had influence over those agents.

But a more complete timeline is far more damning:

Of course, assembling these kinds of facts is well beyond the capabilities of the Associated #FakeNews Press. Leave it to us citizen journalists, schmucks.

Updated daily: A TIMELINE OF TREASON: How the DNC and FBI Leadership Tried to Fix a Presidential Election.

And because McCabe is so innocent he's going to defend the integrity of the FBI by announcing that he'll "retire" just as soon as he's eligible for his full pension (in the hope that Trump will allow him to go "honorably" rather than can his corrupt ass the day after Xmas).

Do it El Don, terminate him like Comey on Tuesday morning and make him fight for his pension check.

Exactly right. As Glenn Reynolds (Instapundit) often notes, they won't stop doing it until there are consequences.

The media will never inform the American public of any of this.