25,000 businesses put at risk with a stroke of Obama's pen

Two weeks ago, during his Inaugural address, President Obama stated: "We have chosen hope over fear."

It turns out, however, that fear comes in handy when you're trying to reward your trial lawyer, Union boss and welfare recipient supporters with a trillion dollars of the taxpayers' dough:

• "A failure to act, and act now, will turn crisis into a catastrophe."

• "Let's do whatever it takes to keep the promise of America alive in our time."

• "In the midst of our greatest economic crisis since the Great Depression, the American people were hoping that Congress would begin to confront the great challenges we face."

• "It is inexcusable and irresponsible to get bogged down in distraction and delay while millions of Americans are being put out of work."

• "If we do not move swiftly to sign the American Recovery and Reinvestment Act into law, an economy that is already in crisis will be faced with catastrophe."

Apparently, however, the situation isn't dire enough to prevent President Obama from harming up to 25,000 small businesses via a direct payback to the Unions that helped elect him. The Association of Building Contractors, which represents 25,000 businesses around the country, condemned an executive order signed by Obama that restricts bidding on federally funded construction projects to union-controlled businesses.

Today's decision to repeal Executive Order 13202 opens the door to waste and discrimination in federal and federally funded construction contracts... This 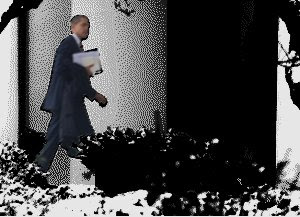 action removes the safeguards that prohibited discrimination based upon union affiliation in the awarding of federal contracts...

Absent the economic benefits of competitive bidding, union-only PLAs are known to increase construction costs between 10 percent and 20 percent and discriminate against minorities, women and qualified construction workers who have traditionally been excluded from union membership.

Union-only PLAs drive up costs for American taxpayers while unfairly discriminating against 84 percent of U.S. construction workers who choose not to join a labor union... All taxpayers should have the opportunity to compete fairly on any project funded by the federal government.

In other words, President Obama just shut out 84% of U.S. construction workers from bidding on federal projects. Change!

Neither is the situation dire enough to prevent the White House from grabbing control of the Census Bureau. Apparently, Chief of Staff Rahm Emanuel has plenty of extra time on his hands -- no significant crises of any kind to deal with such as the economy, the release of nuclear salesman A.Q. Kahn by Pakistan, or an Iran that continues to "clench its fists".

The Census is used "to allocate federal aid to states and draw electoral districts."

Pulling the Census Bureau into the White House is a nakedly partisan ploy and another direct slap in the face to voters who believed his campaign promises.

But we know that the undue influence of lobbyists is part of the problem and this election is our chance to say that we are not going to let them stand in our way anymore.

...We're up against decades of bitter partisanship that cause politicians to demonize their opponents instead of coming together... It's the kind of partisanship where you're not even allowed to say that a Republican had an idea, even if it's one you never agreed with.

At last count, 14 lobbyists work in the Obama White House.

Grabbing the Census Bureau, which has lived in the Commerce Department for decades, is as partisan a move as a President could make.

So much for the kind of politics that's "bad for our country."

The good news? Most Americans will have been sufficiently jaded by Obama's fabrications that they'll automatically discard 90% of what comes out of his pie-hole in 2012. They'll know the naked truth. He's just another slick-talking Chicago politician.

at 11:37 AM
Email ThisBlogThis!Share to TwitterShare to FacebookShare to Pinterest
Labels: Crime, Democrats, Obama