Curious: I didn't read this in legacy media.

The body count from two areas of mass graves in Mexico had grown to 279, the government announced. In Tamaulipas, forensics had pulled 183 bodies from the mass graves. In Durango state to the west, the government had found 96 bodies to date. Both states are disputed territories but little is known of the motives for the killings... 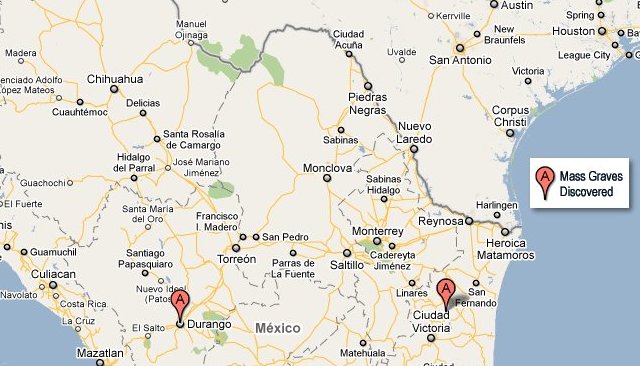 ...In Tamaulipas, the Zetas are battling the Gulf Cartel for control of this lucrative corridor. Numerous victims were pulled from buses as they traveled north and bludgeoned with sledge hammers, authorities reported. In Durango, as InSight has pointed out, the battle may be internal between members of the Sinaloa Cartel.

Good thing that President Obama's Justice Department is suing Arizona so we can import more of this Hamas-style violence.