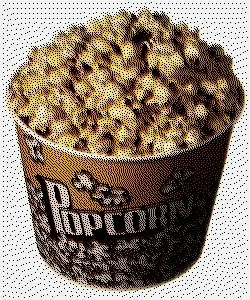 For an administration that likes to talk about "transparency", the Obama White House has earned the worst reputation for ostracizing media in modern American history.

Now, the most thin-skinned president ever (he's 'historic') is engaging in an all-out P.R. war with the ultra-left wing rag The San Francisco Chronicle.

First, the Chronicle reported that the 'Administration exercise[d] its control freak streak' by threatening the paper after it reported unfavorable news:

It seems that Team Obama was none too pleased that veteran Chronicle political reporter Carla Marinucci posted a 40-second video of a group of supporters-turned-protesters serenading the president a cappella - "We paid our dues ... where's our change" - at a recent fundraising breakfast at San Francisco's St. Regis Hotel. The protesters' objection: the treatment of Wikileaks source Pfc. Bradley Manning.

The White House threatened that Marinucci would no longer be allowed to serve as a pool reporter during future Obama swings west. Marinucci's apparent offense was shooting video during an event that was closed to broadcast journalism...

...An administration truly dedicated to transparency would not require journalists to be "in the tank" as a condition of being in the pool.

The White House is denying that it threatened to exclude the San Francisco Chronicle from presidential events in its coverage area after one of its reporters recorded a video of singing protesters at a fundraiser last week that was restricted to print reporters...

...White House spokesman Josh Earnest told POLTICO on Friday that the Chronicle’s claims are “not true,” and that no such threat was ever made, but he wouldn’t provide further details... 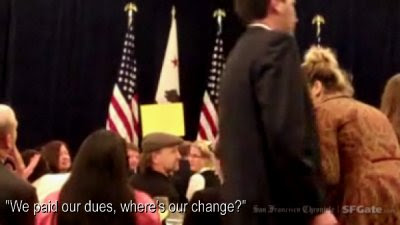 In a pants-on-fire moment, the White House press office today denied anyone there had issued threats to remove Carla Marinucci and possibly other Hearst reporters from the press pool covering the President in the Bay Area.

Sadly, we expected the White House to respond in this manner based on our experiences yesterday. It is not a truthful response. It follows a day of off-the-record exchanges with key people in the White House communications office who told us they would remove our reporter, then threatened retaliation to Chronicle and Hearst reporters if we reported on the ban, and then recanted to say our reporter might not be removed after all.

The Chronicle's report is accurate.

If the White House has indeed decided not to ban our reporter, we would like an on-the-record notice that she will remain the San Francisco print pool reporter.

I was on some of those calls and can confirm Ward's statement... Messy ball now firmly in White House court.

Well, son of a biscuit, aren't they the ones with the Ahmed Maleki tapes?
Release them dudes, whoever you are.

The SF Chronicle is far from a left-wing paper. It may have been years ago, but the overwhelming majority of their coverage is moderate to conservative. Just read the comments on every article over the last few years. Everyone that reads that paper/website seems to be a right-wing politico.

You're way off on your observations sir. Nice try though.