No We Can't -- Michele Bachmann asks 'Do you want to live in a country that is "leading from behind?"'

I didn't hear a rimshot after a White House adviser described President Obama's foreign policy doctrine this way, so I assume it was serious.

Obama may be moving toward something resembling a doctrine. One of his advisers described the president’s actions in Libya as "leading from behind."

Minnesota Rep. Michele Bachmann asks the candid question every American -- except you whack-job progressive drones -- should be asking. 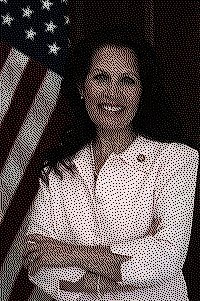 Do you want to live in a country that is "leading from behind?"

...an Obama advisor describes the President's approach to foreign policy as "leading from behind," a "doctrine" that "comes from two unspoken beliefs: that the relative power of the U.S. is declining, as rivals like China rise, and that the U.S. is reviled in many parts of the world."

As a member of Congress and as an American, the notion that America is an exceptional place has given me a sense of optimism about our future that has guided me throughout my career and my life... To have a President who expresses the opposite, a pessimism about America's place in the world paired with an acceptance to let the world abuse us and pass us by, is unprecedented in the history of our nation...

...While the President tries to mask this with verbal gymnastics, the American people know that "leading from behind" is not leading at all--it is following and it is weak.

The America that we love is the giant that defeated the Soviet Union and liberated Europe, the inventor of the Internet and motorized transportation, and a great and giving people whose Navy accurately proclaims herself as "the global force for good." Whether we continue this legacy of greatness is not up to China, nor does it rely on the opinion of the international community. Our capacity to be great is far more personal, determined by the capacity for boldness possessed by each of us and by those who we trust to lead us--this is the core principle of the American spirit. Presidents from Roosevelt to Kennedy to Reagan did not just believe this notion, they shouted it from the mountaintops yet, contrastingly, for a President who made "Yes We Can" a household saying, this new "Obama doctrine" is better summarized by "No, We Can't." Americans know that we can do better.

Michele Bachmann is a patriot for speaking the plain truth about this disastrous administration. You can visit her Facebook page here and donate to her PAC.

I hope she decides to run, because I can unequivocally support Michele Bachmann for President.

`But underlying that style, assures this Obama adviser, there really are ideas. Indeed, “two unspoken beliefs,” explains Lizza. “That the relative power of the U.S. is declining, as rivals like China rise, and that the U.S. is reviled in many parts of the world.” ? `

Relative power did not stop the brand-new USA from calling out - and beating - the Barbary pirate regime, which hugely more powerful countries had thought impractical (yeah, Jefferson had second thoughts and tried to stop it, but since it had already been done...) or from taking on Great Britain (for the second time, but the first as a nation) in 1812. Or Big Power Spain circa 1898.

Reviled? Read news broadsheets from any other country over the last two hundred or so years. When not sneering at "the country bumpkins" they express outright revulsion.

Did anyone in this Administration manage to stay awake during eighth grade history classes?

Michele Bachmann is the best.