Where have we heard this kind of rhetoric before?

The White House has joined congressional Democrats in targeting oil companies with criticism for nearly $4 per gallon gas.

President Obama lashed out at oil companies -- and the tax breaks they get from the government -- for a second day in a row on Thursday and again in Saturday's address... “Four billion dollars of your money are going to these companies at a time when they’re making record profits and you’re paying near record prices at the pump,” the president said at a Nevada town hall. “It has to stop.”

Obama also announced a Justice Department task force that will probe whether speculators and traders are to blame for the high prices. 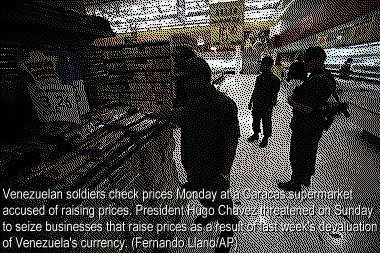 Chávez said [the currency devaluation] moves should not spur price increases, and on his Sunday radio and television address promised to punish those who do.

“There is no reason for anybody to be raising prices,” he said, calling on citizens to “publicly denounce the speculator” and promising to “take over any business, of any size, that plays the bourgeoisie speculation game.”

* * * * * * * * *
In his never-ending search for scapegoats, Venezuelan President Hugo Chávez is quick to point the finger ... Instead of Big Oil, this time he's hounding oil services companies, which do drilling, exploration, and other important work for state-owned Petróleos de Venezuela (PDVSA).

I don't know about you, but isn't it at least a tad discomfiting that the speeches of Chavez and Obama could be confused for one another?

Oh -- and then there's this: Mr. Peabody, please set the Wayback Machine to July of 2008, when the ludicrous Ken Salazar -- now Secretary of the Interior -- insisted that Democrats would continue to block drilling even if gas hit $10 a gallon.

Mitch McConnell (R-KY): "What is the definition of an emergency? Maybe it is $7.50 a gallon? Therefore I renew my consent request with the following modification... that the implementation date that triggers the modification would occur when the price of gasoline reaches seven dollars and fifty cents a gallon." MM: "Mr. President, I renew my request with the modification that the trigger be ten dollars a gallon at the pump."

* * *
We have enough oil to satisfy American needs for at least the next 100 years, but Democrats won’t let you have it. They’d rather you pay $10 per gallon at the pump and watch food prices increase 250% rather than agree to drilling. If you don’t want $10 per gallon gas, vote Republican.

And it's not just the Democrats' hatred of drilling.

It's the Obama administration's suicidal deficit spending that has resulted in unprecedented inflation of commodity prices.

The costs of silver, gold, oil, gas and food (above) have skyrocketed over the last two years.

Since Barack Obama took office, the policy of quantitative easing has touched off a monumental wave of inflation.

While our delightful bureaucrats in Washington insist that inflation "is under control", a quick drive to the gas station helps us refute that propaganda. Americans' costs for energy and everything it helps produce and move -- most importantly, food -- is dramatically increasing. This hidden tax on seniors, "the poor" and "the middle class" is the direct result of Barack Obama's policies of record-setting deficit spending and restricting our access to energy.

And the pain has only just begun. Remember in 2012.

Yeah, they lie all the time -but it works with all those folks out there who want their ears tickled with free lunch, grass for fuel and food, sex anyway they want it and free medical care from the nanny state.

The first time I remember hearing blame heaped on the oil countries was when I was very young, during OPEC's first oil embargo. That was in 1974. After installing a "windfall profits tax" on US oil companies, Congress claimed they would make sure we were no longer dependent on "foreign oil". They've talked about that ever since.

I read somewhere the other day that OPEC thinks there is an oil glut and is planning to cut production. "The Kingdom" must like those high prices.

No more taxpayer funded gov't transportation. Reduce the spending and make Congress & gov't workers pay out of their own pocket just like taxpayers have to. Then, we'll see how fast gas prices decline.

Nobody makes more money off a gallon of gas than the federal govt. $4 billion dollars looks like chump change when compared to the federal gas taxes we pay at the pump.
If Obama seriously wants to talk about "your money" then let him start there.

The major oilcos are set to report earnings.
Obama is ready to demonize them for their nominal profits.
Yes, I know — state oilcos dominate reserves, FTC would sue if there was restraint of trade, etc.
But facts matter less than appearances, so we must inoculate appearances against Obamaite depredations.
To this end, I propose the oilcos report their net income in terms of barrels of oil.
E.g. “Shell reported first quarter earnings as the value of 66 million barrels of oil. That was up 3% from the comparable quarter in 2010…”
And if asked by media for earnings in dollar terms, Shell will reply “Ah, for dollars you’ll have to ask Ben Bernanke, who seems rather profligate in printing them…”