The Barrett Report: What is Hillary Hiding?


The New Media Journal is featuring a seven part series entitled "The Fraudulent Senator." In it, journalists Joan Swirsky, Justin Darr, A.J. DiCintio, Noel Sheppard, and Frank Salvato painstakingly dissect "the single biggest incident of campaign finance fraud in US history and a coordinated cover-up that stretched from the halls of justice to Capitol Hill to the mainstream media." 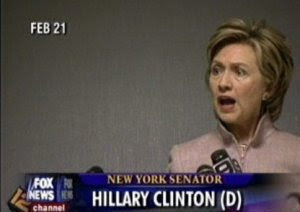 Haven't heard about it? Put simply, the subject of their investigation is Hillary Clinton, which explains the coverage vacuum. The series scrutinizes Clinton's gala fundraising concert arranged by businessman Peter Paul, an event that the Federal Election Commission calls "Event 39" in its investigatory documents.

I'll cover the entire series in a later post. There's a bit of detail that I'd like to expand upon first. In Part I of the series, we read:


Even now, the Barrett Report remains redacted; in effect, significant portions have been removed. You and I -- the American taxpayers -- spent over $20 million on this investigation and are unable to see the complete results.

With Hillary Clinton positioned for the presidency, isn't it time we demanded the release of the full report?

"WHAT WE WERE PREVENTED FROM INVESTIGATING"


Has any Independent Counsel, ever, expressed such bitterness? The particulars of the investigation only make you shake your head.


In effect, the Attorney General at the time -- Janet Reno -- "limited investigators to one year of Cisneros's returns, and Justice Department officials failed to cooperate with [the] probe."

The conclusion of the protest from the Criminal Investigation Division (PDF) states:


The New York Daily News places the fix in the lap of the Clintons.


The New York Sun also succinctly places blame for the coverup with the Clintons:


Why were so many pages redacted? What was the cover-up to which Barrett alluded? What are they hiding?

YOUR CONGRESSIONAL REPRESENTATIVE CAN PUBLISH THE ENTIRE BARRETT REPORT

Robert Novak says that any member of Congress can read -- and publish -- the entire Barrett Report.


Is it time to ask our Congressional Representatives for the entire Barrett Report?

With Hillary Clinton poised to take the Democratic nomination for President, Americans must be privy to the full report for which they paid in full. We demand the full disclosure of the Barrett Report.
at 5:43 PM
Email ThisBlogThis!Share to TwitterShare to FacebookShare to Pinterest
Labels: Democrats, Hillary, MSM