The New York Times In Print & Online: Melting Down


The financial woes of the New York Times (NYSE:NYT) have been widely reported. 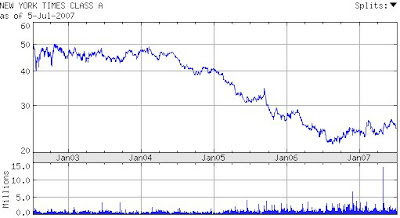 The stock price has melted faster than a scoop of ice cream in Michael Moore's jowls. And for the last fiscal year on record (2006), the Times lost a cool half billion dollars.

In doing some research on Alexa, I found some additional data regarding the Times' online presence.

In terms of traffic rankings, the Times is flirting with an all-time low after a precipitous drop over the last 18 months.

For management that permits a "newspaper" to censor, omit, and mislead its readers as much as the Times does, this can't come as a surprise.
at 9:03 PM
Email ThisBlogThis!Share to TwitterShare to FacebookShare to Pinterest
Labels: MSM, New York Times